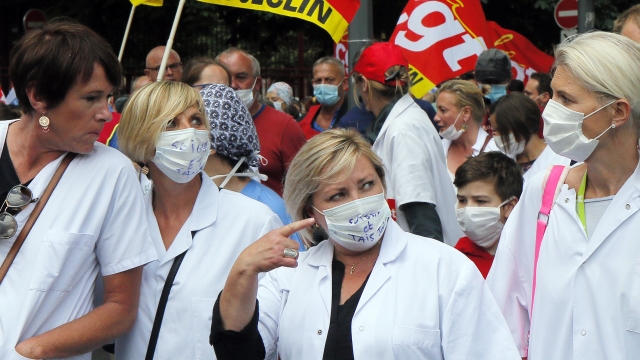 After seven weeks of negotiating with multiple unions, the French government signed a deal Monday worth more than $9 billion.

Health care workers in France are getting a pay raise.

After seven weeks of negotiating with multiple unions, the French government signed a deal Monday worth more than $9 billion. The majority of that money will go towards covering a raise in wages for nurses and care workers. On average, those jobs will now see a monthly raise of $208. The rest of the funds — about $510 million – will be given to doctors working in the public sector.

France's prime minister called the deal "historic," saying, "This is first of all recognition of those who have been on the front line in the fight against this epidemic."

Since the start of the coronavirus pandemic, people in France have been celebrating their health care workers as heroes. Residents clap for them each night from their windows and balconies. And the government redesigned its annual Bastille Day celebrations Tuesday to honor health care and other frontline workers.

But health care workers in the country have long complained about low salaries and insufficient staff numbers at hospitals. They held hundreds of rallies across France last month to demand improvements.