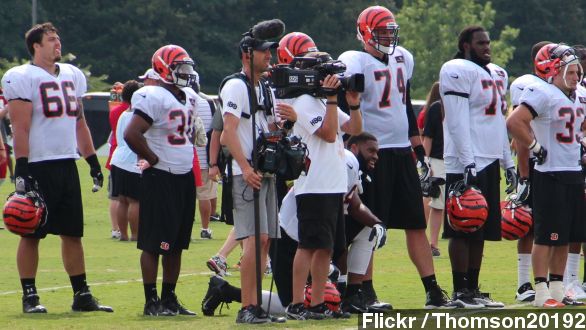 By Matt Moreno
June 12, 2014
A 30-person HBO crew will follow the Atlanta Falcons around for five weeks during training camp for the five-episode series.
SHOW TRANSCRIPT

It's official. The cameras and bright lights won't be on the Atlanta Falcons just on Sundays. They'll be there essentially every day of training camp, too.

The all-inclusive, behind-the-scenes, highly invasive HBO documentary series "Hard Knocks" is going to Atlanta. HBO and the NFL announced the agreement Thursday. A 30-person HBO crew will film the Falcons for five weeks and knock out five episodes, each an hour long. The series will debut Tuesday, Aug. 5. (Via Flickr / Thomson20192)

If you're unfamiliar with the series, the HBO show follows a certain NFL team around during training camp and documents on and off the practice field. The Cincinnati Bengals were featured last year. (Via HBO / "Hard Knocks")

But the 30-person film crew can often add drama and distraction to already intense training camps.

For that reason, many teams have declined to let cameras into their facilities for the five-episode series. (Via Sports Illustrated, Fox Sports, New York Post)

"It was just something that I just felt in my gut I just didn't want to be a part of the first year. I saw the positives of it, but I think there's some negatives to it as well."

That's led the NFL to put a rule in place saying it can force teams to participate in the series. The only way a team doesn't end up a potential subject for the show is if it has a new head coach, it's made it to the playoffs once in the past two years, or it's already appeared on the show in the past decade. (Via Flickr / Thomson20192)

But the Falcons made it to the playoffs in 2012, making this decision a voluntary one. And for a team that went a dismal 4-12 last season, it's opened itself up to a bit of criticism.

Jeff Schultz of The Atlanta Journal-Constitution writes: "So let me understand this: The same organization that fell apart a season ago ... has decided to let a cable television show go behind the scenes in training camp? There are a lot of ways to fix an organization. ... But putting 90 players and a dozen coaches on a stage for a clown show isn't one of them."

The show will debut Aug. 5 with the season finale coming Sept. 2. The Falcons' first regular season game is Sept. 7 against the Saints.