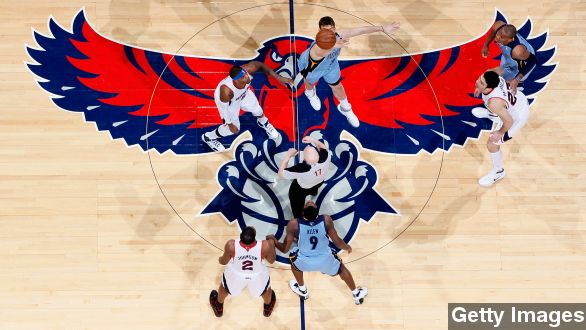 By Jamal Andress
September 7, 2014
Atlanta Hawks owner Bruce Levenson is reportedly selling his majority stake in his team over a 2012 email that he calls racially offensive.
SHOW TRANSCRIPT

In a move no one saw coming, Atlanta Hawks owner Bruce Levenson is reportedly selling his majority stake in the Atlanta Hawks over a 2012 email that he calls "inappropriate and offensive."

In a statement from Levenson he writes, "If you’re angry about what I wrote, you should be. I’m angry at myself, too. It was inflammatory nonsense."

The Atlanta Journal Constitution published what it says is the entire email. It says in part, "I have told them I want some white cheerleaders ... i have also balked when every fan picked out of crowd to shoot shots in some time out contest is black. I have even bitched that the kiss cam is too black. ... This is obviously a sensitive topic, but sadly i think it is far and way the number one reason our season ticket base is so low.​"

According to his statement, Levenson himself disclosed the email from August 2012 to the NBA in July as the uproar over Donald Sterling's comments reached a fever pitch. The NBA carried out an investigation into his comments though Levenson decided to sell the team prior to the completion of the investigation.

Adam Silver said in a statement about Levenson, "The views he expressed are entirely unacceptable ... I commend Mr. Levenson for self-reporting to the league office, ... and for putting the best interests of the Hawks, the Atlanta community, and the NBA first."

And while Levenson's comments have drawn comparisons to Donald Sterling, some say they are on totally different levels.

ESPN's Bomani Jones tweeted, "The stuff about black people showing up late wasn’t a good look, though. Not a sell-your-team bad look, but he coulda left that out."

"I can't be partners with somebody who shares those views."

And while many are applauding Levenson's decision to self report the email and sell the team there is talk that he was on his way to selling it anyway.

USA Today's Jeff Zilligitt tweeted as much and according to SB Nation there was a reported sale in 2011 that fell through.

Levenson purchased the Hawks back in 2004 for about $208 million. Hawks CEO Steve Koonin will control team operations while the Hawks organization works through the sale process.