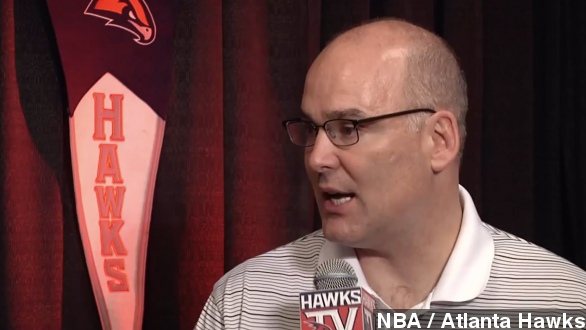 When it rains, it pours — and the downfall hasn't let up for the Atlanta Hawks' front office. Just days after owner Bruce Levenson announced he was selling his stake of the franchise, general manager Danny Ferry says he's taking an indefinite leave of absence. This comes after the release of an audio recording in which Ferry made disparaging remarks about Miami Heat small forward Luol Deng.

In a statement released Friday, Ferry said, in part, "No words can adequately describe my remorse for the hurt that I have caused many people through the statements I repeated, most importantly Luol Deng. ... My focus moving forward is to tirelessly work to rebuild trust with this community and with our fans."

Those statements he's referring to were made during the Hawks' June 6 conference call about free agents:

"He's also a good guy overall, but he's not perfect. He's got some African in him, and I don't say that in a bad way. ... He has a store front out front that's beautiful and great, but he may be selling some conterfeit stuff behind you."

There's more: WSB-TV also reports some of those offensive statements came from a scouting report from higher-ups within the Cleveland Cavaliers organization, one of Deng's former teams.

Deng released a statement of his own after that phone call was released, calling Ferry's statements "disturbing" and saying, "Ultimately, I’m thankful to be with an organization that appreciates me for who I am and has gone out of its way to make me feel welcome."

Before Friday, opinions on whether to fire Ferry were split. It was revealed Hawks owner Michael Gearon Jr. wanted to get rid of Ferry after learning of the phone call. NBA Commissioner Adam Silver backed Ferry saying he should keep his job saying his comments shouldn't warrant the boot.

For reference, this front-office shakeup with the Hawks began with a disclosure from Levenson himself. An internal investigation turned up that statement from Ferry and a racially-charged 2012 email from Levenson, where the owner lamented poor attendance and an overwhelmingly black crowd.

While Levenson is out and Ferry will, presumably, be gone for a while, the issue Levenson brought up about the Atlanta Hawks' audience demographics will remain. According to one Buzzfeed writer, that's unfortunate: "What [Levenson] saw as a problem with white audiences was actually a missed opportunity to build the black audience. ... The new owner of the Hawks — whoever that may be — should learn to take advantage of the fan culture, rather than running away from it."

NBA reporter David Aldridge wrote a similar sentiment: "Perhaps the next owner will seek out the support of the entire Atlanta community."

In the meantime, Hawks CEO Steve Koonin said in a statement head coach Mike Budenholzer will take over basketball operations and the team could hire a chief diversity officer to ensure a similar situation doesn't happen in the future.