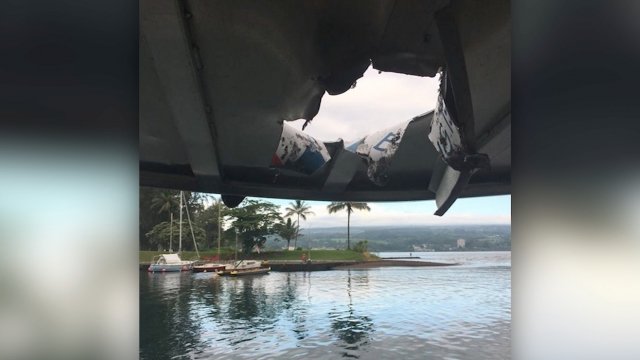 SMS
'Lava Bomb' From Hawaii's Kilauea Volcano Injures 22 People
By James Packard
By James Packard
July 16, 2018
The Kilauea volcano has had a spike in activity since early May, though it's been active since 1983.
SHOW TRANSCRIPT

At least 22 people were injured Monday when a lava explosion sent debris onto a tour boat in Hawaii.

A local news outlet reports a basketball-sized lava bomb put a hole in the roof of the boat. At least one woman was reportedly left with serious injuries and had to be airlifted.

The boat was carrying people observing lava flows from the Big Island's Kilauea volcano. Lava is flowing into ocean on the southeast side of the island. In fact, so much lava has dropped into the water, it created a tiny little island off the coast.

The Kilauea volcano has been active since the 1980s, but there's been a spike in activity since early May.