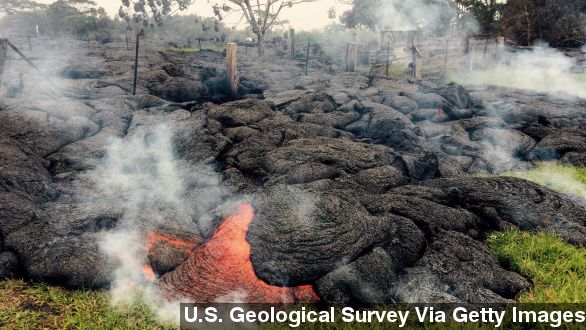 The fiery lava stream spewing from a volcano on Hawaii's Big Island destroyed its first home in the Pahoa village Monday.

According to NBC, Hawaii County civil defense official says no one was living in the home, which had been vacant since August. Authorities say the nearest neighbor is about a half-mile away.

CNN quotes a USGS spokesperson saying the lava flow set the house on fire before noon local time. The official also says, "There are no other homes in imminent danger" and they'll continue to keep an eye on the situation.

Since the Kilauea Volcano erupted several months ago, lava has edged closer to the island community — at a somewhat inconsistent rate.

The red-hot molten rock entered the Pahoa area about two weeks ago and has spread out over streets, engulfed a cemetary and prompted evacuations. But local officials say most of the lava flow had stalled for the past week and it hadn't claimed any residential property until now. (Video via Big Island Video News)

Authorities have also warned residents of another danger outside of structure damage — smoke inhalation.

HAWAII COUNTY CIVIL DEFENSE: "Smoke conditions may increase in some areas and residents down wind that may be sensitive or have respiratory problems are advised to take necessary precautions and to remain indoors."

So how about stopping the lava flow? Well, that's easier said than done.

In fact, in 1935 the U.S. military actually tried to bomb another area to redirect a flow during a different volcanic eruption in Hawaii, to somewhat ambiguous results.

And residents of an Icelandic town hosed off the front of an encroaching flow in 1973, reportedly using more than 1.5 billion gallons of seawater. The lava flow came to a halt, but it's also not clear whether credit goes to the seawater.

According to the USGS, since the Kilauea Volcano first became active in 1983, it's smothered about 78 square miles, destroyed more than 200 structures and "ranks as the most voluminous outpouring of lava from the [area] in the past five centuries."