Have The Browns Given Up On Johnny Manziel? 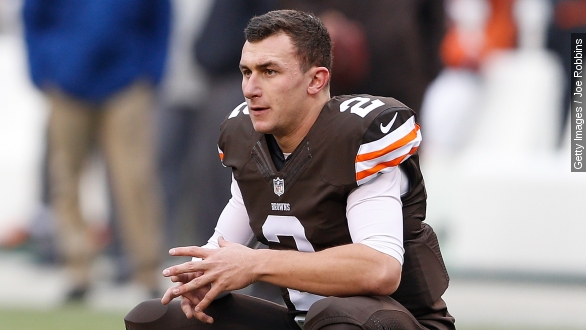 SMS
Have The Browns Given Up On Johnny Manziel?
By Danny Matteson
By Danny Matteson
April 30, 2015
Rumors have the Cleveland Browns trading up to the No. 2 spot in the NFL draft to take quarterback Marcus Mariota.
SHOW TRANSCRIPT

Johnny Football: His short NFL career has been nothing if not eventful, and now his chances of being the Cleveland Browns franchise quarterback could be about to take a serious hit.

On Wednesday ESPN Cleveland quoted Browns analyst Tony Grossi on Twitter saying he thought the Browns had "given up on the idea of Johnny Manziel as a franchise quarterback."

That kind of speculation is what you'd expect with the NFL draft rapidly approaching, but this particular rumor might have some truth to it.

ESPN cites a source familiar with discussions between the Browns and the Tennessee Titans saying the Browns have offered two first-round picks in exchange for the Titans' No. 2 pick overall.

"This is partly doing their legwork to be prepared and also partly checking around to see about a player they may want."

According to those same sources, the Browns' likely target at No. 2 would be Oregon quarterback Marcus Mariota — the best quarterback on the board if Jameis Winston is taken at No. 1 as many expect.

Of course, the team is denying all of this. The Browns' general manager told the NFL he is listening to all offers but has no specific plans to attempt to move up to the No. 2 spot.

Manziel was drafted No. 22 overall in the 2014 draft and had a tumultuous first season on and off the field.

His larger-than-life personality made him divisive at times in the Browns locker room — and his lackluster stats didn't help.

He also completed a stint in rehab in April, though the reason behind his stay was not disclosed.

Since his return, some previously critical players have had positive words for Manziel.

As the New York Post reports, veteran Browns offensive lineman Joe Thomas has said Manziel is "night and day" in terms of commitment.

Of course, whether that's enough to hold onto his spot with the Browns, we'll have to wait and see. Tune in to the NFL draft Thursday night to find out what moves the Browns decide to make.