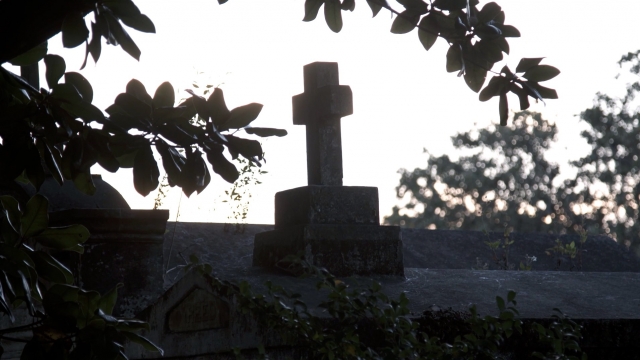 The agony of the past is still present on every corner and in every cemetery, making New Orleans one of the most haunted places in America.

For many in New Orleans, music is a reminder of hope in a city where memories of bloodshed, suffering and pain haunt the streets.

"We have been shaped by fire, water, disease and our own fractured humanity," local historian Jane Delacour said. "We are one of the people who can take tragedy and turn it into a celebration."

The agony of the past is still present on every corner, in every cemetery making New Orleans one of the most haunted places in America.

"In New Orleans here, we have a lot of spirits that stayed here," a psychic medium said.

Every street in the French Quarter has a trace of torment.

Jeffrey Holmes, a local historian and ghost tour guide, says one of the spookiest paranormal manifestations is "The Haunting of the Singing Rains."

It all goes back to the transition between the French and Spanish ruling of New Orleans in the late 1760s. Some rebels were executed, and their bodies were displayed in front of St. Louis Cathedral.

"Our priest provided our secret burial for them, and as the crowd walks the alleyway through the rains, they're singing," Holmes said. "They say, nowadays, if you walk down this alleyway in heavy rain storm, you can start to hear the music."

One of the most authenticated, according to paranormal investigators, is at Muriel's restaurant. The story goes back to 1814, when Pierre Jourdan lost his home in a poker game. Some say the loss was so intense he hanged himself. So now, every evening, the restaurant staff leaves a dinner roll and a glass of red wine on the table where it is believed he killed himself. They claim if they don't do that, bad things could happen.

African culture – now celebrated in New Orleans – has a haunted history. At one point, New Orleans housed the largest slave market in the United States.

In 1719, within a year of the city's establishment, thousands of people were forcibly shipped from West Africa. More than 135,000 of the enslaved people were purchased. But instead of disappearing, the African culture has persisted, shaping everything from food and music to religion. One such religion: Vodou, or Voodoo, as it is commonly known today. People still hold misconceptions about the practice.

AXEL TURCIOS: "Robi, why do so many people associate Voodoo with evil things?"

VOODOO PRIEST ROBI: "It's because of Catholicism and Hollywood. ... The Catholics back in the 1800s believed that if it was not Catholicism, it was devil worship, man. And if it wasn't inside the Bible, it was black magic so the rumors were spread because of the Catholics saying that these people killed babies and they drink blood and they worship the devil."

TURCIOS: "What is the origin of the Voodoo doll that so many are afraid of?"

ROBI: "The Voodoo doll itself actually originated as a record-keeping device."

Enslaved people were not allowed to read, write or seek any medical help. So, they combined herbology they knew from Africa and added Native American medicinal practices to treat disease.

The LaLaurie Mansion is probably one of New Orleans' most infamous and notorious homes. It was owned by Madame Marie Delphine LaLaurie. Considered to be one of the richest and most beautiful women in New Orleans. The legend says she tortured and killed more than a dozen enslaved people inside the home.

The mansion's sinister past has granted it the title for the most haunted house in New Orleans. It is believed LaLaurie gruesomely murdered at least 12 of those enslaved by her in the home. In 1834, a fire broke out in her mansion. Witnesses accounts describe the findings of bound bodies in her attic beaten, bruised and bloodied.

"She went back to where she came from in Europe and died there. So she got away with everything that she ever did to this people here," Robi said.

Many people claim they've seen her ghost wandering around the Royal Street Mansion, and some believe her evil spirit torments the souls of those she killed, even in the afterlife.

Guests at the Dauphine House Bed and Breakfast have reported seeing unearthly apparitions. The property owner, Karen Jeffries, has her own ghost stories.

"All of a sudden, I felt like I was stopped by an invisible wall about halfway up the steps," Jeffries said. "I looked at the top of the stairs, and I saw a couple standing there. They were wearing black. It looked like mourning attire from maybe mid-1800s. But the interesting thing is that they were standing there, smiling. Then I left immediately and called some of my friends who I knew were psychics to come and check it out."

Jeffries says this sighting happened shortly after she bought the house in 1996. The home was built in 1860 and attracts visitors because of the supernatural happenings.

Newsy wanted to see for ourselves, so we spent a couple nights in the Dauphine House. During our second night, we decided to leave a camera on to see if we were able to catch anything out of the ordinary.

Several times during the night, there was an image becoming darker, as if something was obstructing the light. In The Big Easy, it appears every building is linked to a past very hard to forget.

Haunted America: The Ghosts of Gettysburg

Gettysburg is the site of the largest, costliest and deadliest battle of the Civil War, with more than 50,000 estimated casualties.

Some believe a little girl's spirit torments those who visit or dare to live in the home.

History has revealed the persecutions were all about money, land and power.