Hate Waiting For Food At Theaters? There's An App For That 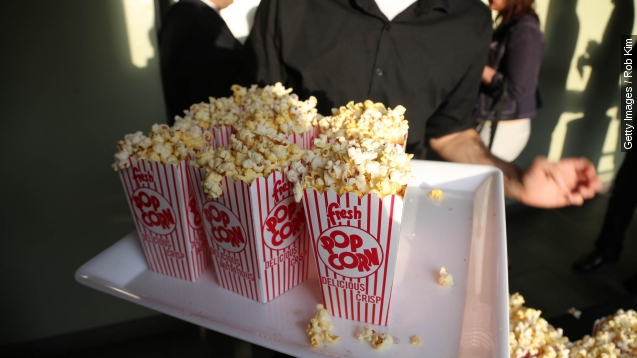 SMS
Hate Waiting For Food At Theaters? There's An App For That
By Jamal Andress
By Jamal Andress
December 14, 2015
The concession-stand ordering concept is being tested at four theaters in Kansas City, Missouri, but AMC says it wants the service nationwide ASAP.
SHOW TRANSCRIPT

It's a simple problem that's plagued moviegoers for decades: long lines. And while modern tech will let you buy your tickets online, that luxury does not extend to the concession stand — at least not yet.

According to the New York Times, Regal Entertainment and AMC Theaters, the two largest multiplex chains in America, are testing technology that allows moviegoers to preorder and prepay for food on their smartphones.

"When you get to the store, no need to wait in line. Just come pick up your order," a Starbucks commercial said.

Many companies outside the movie industry have had success with similar tech. Starbucks saw profits jump in the first eight months it offered mobile order and pay.

Right now, the concept is being tested at four theaters in Kansas City, Missouri, but according to The New York Times, AMC wants the service nationwide "as fast as we absolutely can."

Regal is working with California startup Atom Tickets to expand its mobile order service, but so far, it's only in five Knoxville, Tennessee, theaters.

Either way, both theater chains could use a boost in concession sales. While theaters have to give nearly 50 percent of their ticket sales to the studios, they keep more than 85 percent of what they make at the concession counter. I guess that's why a large popcorn and a Coke cost a whole paycheck.