Hate Crime Cases And Convictions Are Rare In U.S. Courtrooms 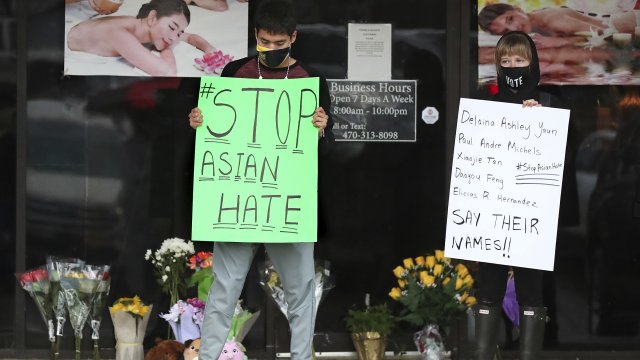 The suspected gunman who killed eight people in three Atlanta-area massage parlors faces eight counts of murder and one count of aggravated assault.

"It's still early, but he does claim that it was not racially motivated," Captain Jay Baker of the Cherokee County Sheriff’s Office said.

But so far, no hate crime charge alleging the attacks were motivated by bias.

Seven of the eight victims were women — six of Asian descent. But local authorities have so far shied away from characterizing this incident as a hate crime or pursuing it under Georgia's new hate crime law.

"The words of a suspect, particularly ones that suit their own interest, should be taken with a huge grain of salt," Brian Levin said.

Brian Levin is the director of the Center for the Study of Hate & Extremism at California State University in San Bernardino.

LEVIN: "But by the same token, remember, this is something that, if charged, has to be proven to a jury. … The particular high requirements of proof make it such that establishing motive, as opposed to the intentional act itself, is much more difficult."

Hate crime cases are a rarity in U.S. courtrooms and often difficult to prosecute. In California, for example, out of 1,066 hate crime reports in 2018, prosecutors only pursued 228 under the state hate crime law. The state of Georgia didn't have a hate crimes law until the summer of 2020.

Many community members and onlookers are calling specifically for hate to be included in the state's case in recognition of the rise in hate crimes against Asian Americans across the country.

"We were horrified, and that sinking feeling that I had was this had to be a crime related to AAPI hate. As we have learned details of the event unfold, I still believe this is a racially motivated crime," Georgia State House Rep. Bee Nguyen said.

But Levin says it's not surprising that, at least for now, Georgia is pursuing what could be considered the legally easier route in this case.

LEVIN: "With respect to hate crimes, unfortunately, the law routinely fails. … The community has an interest in having their concerns and their harms validated as well. And that's often a big gap that we see with regard to hate crime prosecutions."

According to local police, the investigation is ongoing, so hate crime charges are still a possibility.

“Our investigation is looking at everything, so nothing is off the table," Atlanta Deputy Police Chief Charles Hampton Jr. said.