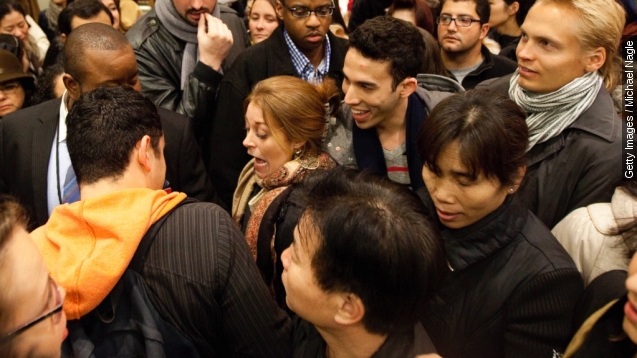 If being pushed and shoved while looking for low-priced Christmas presents is a nightmare of yours, you can take your Black Friday outdoors.

Dozens of state parks around the country are waiving fees to get people to enjoy nature instead of wrestling with someone's grandmother for a PS4.

It's all a part of outdoor goods store REI's viral #optoutside. The company is closing its doors on Black Friday because REI, like many retailers around the country, says Black Friday is getting out of hand. (Video via REI)

And the hashtag is gaining some traction. REI says it's gotten almost 1 million endorsements for the campaign. In a statement, the CEO said: "The idea has struck a chord – far more than we expected. Clearly people are looking to do something a bit different with their time."

And he may be right. But is Black Friday headed to the fake holiday graveyard? Well, sort of.

Instead of waiting outside to get their hands on that new item, more people are just shopping in their jammies online and doing it throughout the year.

Thanks to that, last year retailers made $51 billion on Black Friday, down from $60 billion in 2012.

Not to mention, Black Friday has turned into ... um, Gray Thursday? Every year, stores have opened their doors earlier and earlier, some even on Thanksgiving Day. As you can imagine, that's brought protests from workers and anger from some customers. (Video via NBC)

But don't worry, retailers, some people still want to hit the brick-and-mortar stores as early as they can. Take Jarvis Johnson from Arizona. He's been sitting outside of a Best Buy since Sunday. (Video via KPHO)