Has President Trump Delivered On His 100-Day Contract With Voters? 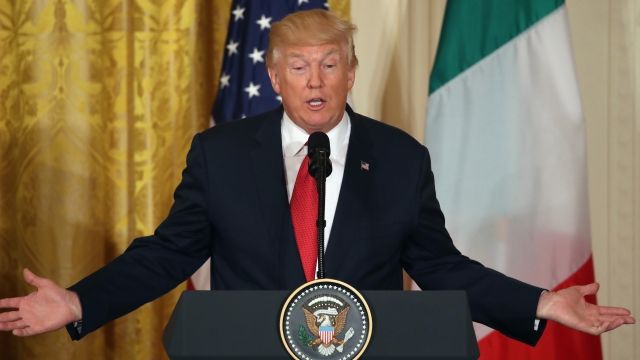 SMS
Has President Trump Delivered On His 100-Day Contract With Voters?
By Eugene Daniels
By Eugene Daniels
April 27, 2017
In October 2016, Donald Trump signed a contract with the American voter. Has he delivered?
SHOW TRANSCRIPT

President Donald Trump's first 100 days have been a flurry of activity, promises, signing ceremonies and some missteps. But the easiest way to know if the president made good on his promises is by looking at his contract with voters.

There are three categories on Page 1: cleaning up corruption in D.C., protecting American workers and restoring security and the constitutional rule of law.

In what is essentially the "draining the swamp" category, Trump has completed five of his six measures: from a federal hiring freeze to a five-year ban on White House and congressional officials becoming lobbyists to requiring that two regulations get eliminated for every new one.

There's just one left: "A constitutional amendment to impose term limits on all members of Congress."

The second category is all about American workers. But Trump hit only three out of seven bullets. The first two deal with arguably his favorite topic: trade. He says he intends to renegotiate NAFTA and signed an executive order withdrawing America from the Trans-Pacific Partnership.

The five rule-of-law actions have hit some legal trouble of their own. While Trump put a justice on the Supreme Court, his immigration ban has stalled multiple times along with his plan to block federal funding to sanctuary cities.

Most of the promises on the doc are things any president could do on their own. The one thing that hasn't worked out is working with Congress to create legislation. And that's where the second page comes in: It's all legislative measures.

Out of these 10 measures, only two have had any real traction. And the repeal and replace of Obamacare was a pretty monumental failure after the bill was withdrawn because it didn't have enough Republican support. And the plan for tax reform has only been announced.

The majority of Trump's 100-day contract has yet to come to fruition, but lucky for him, he's still got more than 1,300 left.