Has Hungary Forgotten Its History? 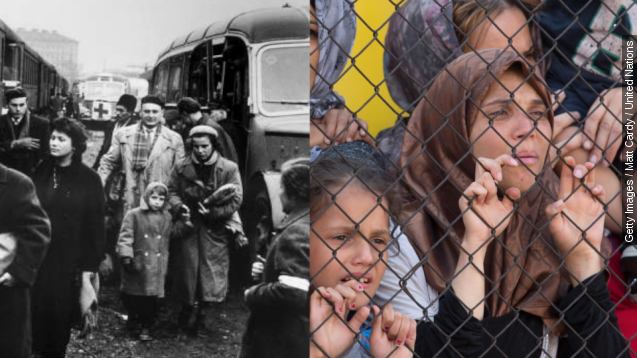 The refugee crisis in Hungary, although unprecedented in scale, parallels other moments in the country's history.

In 1956, in the aftermath of a failed revolution against the Soviet Union, some 200,000 Hungarians fled their country. Fortunately for them, Austria kept its borders open. (Video via U.S. National Archives)

The same can't be said of Hungary today.

The country is rushing to build a 12-foot-tall barbed-wire fence along its southern border.

The fence is Hungary's way of, as its prime minister put it, "keeping Europe Christian."

Prime Minister Viktor Orban has pledged to bring the number of refugees entering his country to zero.

Which would be a lot for a country of 10 million. Except that most of these refugees are just passing through on their way to wealthier, more welcoming nations like Germany, Sweden and Austria.

They don't want to stay in Hungary. And who can blame them. (Video via U.N. High Commissioner for Refugees)

Videos like this have emerged. At a holding center in Hungary, police were seen throwing food at refugees inside a pen. (Video via Michaela Spritzendorfer-Ehrenhauser)

Journalists aren't allowed into these camps, but the activists who've seen them firsthand say the conditions are "filthy" and "overcrowded."

The conditions are so bad, Austria's chancellor compared them to Auschwitz. (Video via U.N. High Commissioner For Refugees)

The border crisis lends itself to one more comparison. In 1989, thousands of East Germans had gathered in Hungary, hoping to pass through to Austria and then onto West Germany. They ended up making it. Hungary tore down its fence and let them through. (Video via ABC)

Twenty-six years later, the first Communist state to tear down the Iron Curtain is effectively building a new one.