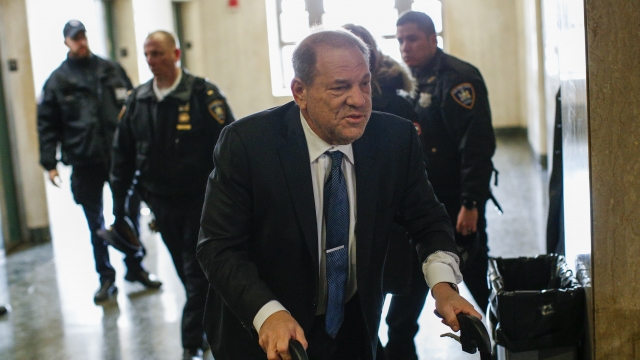 SMS
Harvey Weinstein Plans To Appeal New York Conviction
By Katherine Biek
By Katherine Biek
February 26, 2020
A jury convicted Weinstein on two of the five counts against him — criminal sexual act in the first degree and rape in the third degree.
SHOW TRANSCRIPT

A Manhattan jury found Weinstein guilty Monday on two of the five counts against him: criminal sexual act in the first degree and rape in the third degree. He was acquitted of two counts of predatory sexual assault, which were the most serious charges against him.

A judge ordered Weinstein to remain in jail until his sentencing date on March 11. But instead of going to Rikers Island after the verdict Monday, the disgraced movie mogul was rerouted to New York's Bellevue Hospital for a medical emergency.

One of Weinstein's attorneys spoke with reporters after visiting him in the hospital Tuesday.

"All he asked was that we continue, meaning the legal team, to continue to go out there and proclaim his innocence and to use all the tools that the criminal justice system gives us to make sure justice is done. And for Harvey Weinstein, justice being done at this point is that the appellate division looks at this case as a whole," Arthur Aidala said.

Weinstein's lawyer told Bloomberg News the team plans to argue that the jury was tainted and that the judge made a series of errors, including allowing the use of so-called "prior bad acts" witnesses. These were women who had accused Weinstein of similar crimes, but their allegations were either too old to prosecute or happened outside of the prosecutors' jurisdiction.

New York state law prevents Weinstein's legal team from filing his appeal before his sentencing date. Weinstein faces up to 29 years behind bars for the two charges.