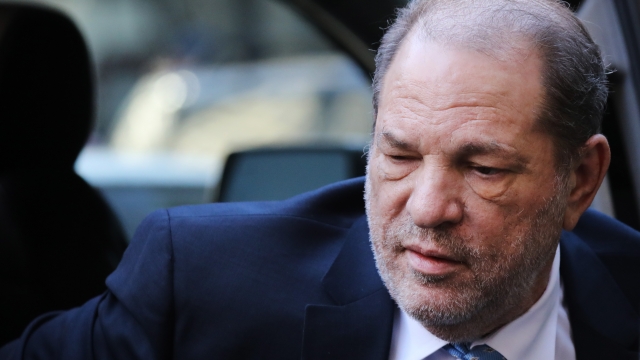 SMS
Harvey Weinstein Hospitalized With Chest Pains After Guilty Verdict
By Briana Koeneman
By Briana Koeneman
February 25, 2020
The former Hollywood movie producer was heading for Rikers Island on Monday when he was rerouted to New York's Bellevue Hospital.
SHOW TRANSCRIPT

An attorney for Harvey Weinstein says the former Hollywood movie producer is doing OK after he was rushed to the hospital with chest pains shortly after a jury found him guilty of rape and sexual assault.

Weinstein's attorney told CNN he was heading for Rikers Island Monday when he was rerouted to New York's Bellevue Hospital. He was admitted for chest pains, heart palpitations and high blood pressure.

Early on Monday, Weinstein was convicted on two of the five counts against him: criminal sexual act in the first degree and rape in the third degree. He was acquitted of two counts of predatory sexual assault, which were the most serious charges against him.

Weinstein's trial focused on the testimonies of two women. One says he raped her in her hotel room in 2013, and the other says he forced her to participate in a sexual act in 2006.

Weinstein's expected to be transferred to Rikers Island when he's released from the hospital, and he'll serve up to 29 years. It's not yet clear when he'll stand trial for similar charges in California, but if he's convicted on all counts there, his sentence could jump by as much as 28 years.