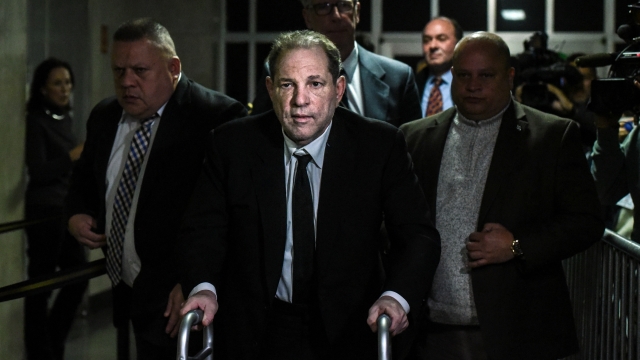 Harvey Weinstein was charged with rape and sexual assault in Los Angeles on Monday. The Hollywood producer's criminal trial in New York began just hours before.

The Los Angeles County District Attorney, Jackie Lacey, says Weinstein has been charged in connection with two "separate incidents over a two-day period in 2013." In the first, a woman alleges he forcibly entered her hotel room and raped her; in the other, a woman says he sexually assaulted her in a hotel suite. He faces "one felony count each of forcible rape, forcible oral copulation, sexual penetration by use of force and sexual battery by restraint." If he's convicted in the Los Angeles case, he could be sentenced to up to 28 years in state prison.

In New York, Weinstein was charged with two counts of predatory sexual assault and one count each of first-degree criminal sexual act, first-degree rape and third-degree rape. That case focuses on a woman who says he raped her in 2013 and another woman who says he forced her to participate in a sexual act in 2006. He's pleaded not guilty, but if convicted he could face life in prison.

Weinstein's trial is beginning more than two years after allegations about him were published by The New York Times and The New Yorker. Since then, more than 80 women have alleged Weinstein harassed or assaulted them, and that surge helped fuel the #MeToo movement.

The 67-year-old movie mogul has repeatedly denied any wrongdoing and says he's only had consensual sexual activities with women.

Lacey said once Weinstein's trial is finished in New York, which could take a few months, he is expected to appear in court in Los Angeles. Prosecutors there are recommending a $5 million bail.

Lacey said, "We believe the evidence will show that the defendant used his power and influence to gain access to his victims and then commit violent crimes against them."

The jury selection for Weinstein's New York trial is scheduled for Tuesday.