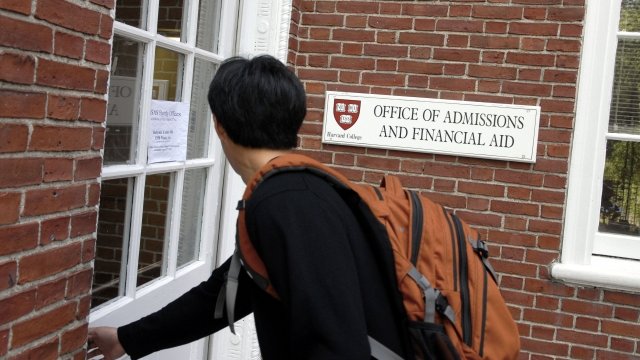 By Cristina Mutchler
October 12, 2018
A trial starting Monday in Boston will examine how the school uses race in determining which students it admits.
SHOW TRANSCRIPT

Harvard University is going to court, facing allegations that its admissions policies are racially biased against Asian-Americans.

A trial starting Monday in Boston will examine how the school uses race in determining which students it admits.

In 2014, a nonprofit group sued the university, claiming it discriminates against Asian-American applicants during the admissions process. The suit accuses Harvard of holding Asian-Americans to a higher admissions standard, compared to other minorities.

The group's received backing from the Trump administration. In August, the Justice Department filed a statement of interest in support of the plaintiffs, noting that because the school uses taxpayer dollars, it agrees to not racially discriminate.

Harvard denies discriminating against Asian-Americans, saying race is just one of multiple factors the school considers before accepting a student. According to the institution, Asian-Americans make up almost 23 percent of the latest freshman class.

The ruling could have wider implications when it comes to the use of race as a factor in higher education admissions processes. There's a chance the judge's decision could be appealed, and the case could make its way to the Supreme Court.

The trial is expected to last three weeks.