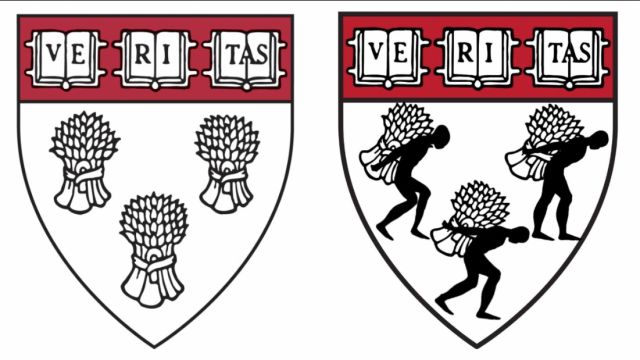 SMS
Harvard Law School Drops Its Shield Symbol After Months Of Protests
By Jamal Andress
By Jamal Andress
March 15, 2016
Student protesters demonstrated throughout the year and at one point, occupied a law school lounge and the dean's office.
SHOW TRANSCRIPT

Back in October, students at Harvard Law School called for the removal of its shield because it was connected with the Isaac Royall family, who owned slaves and was accused of killing them. Nearly six months later, the shield is coming down.

The school's dean said in a statement on the decision: "We cannot choose our history but we can choose that for which we stand. Above all, we rededicate ourselves to the hard work of eradicating not just symbols of injustice but injustice itself."

The Royall family played a big part in establishing the law school. It was Issac Royall Jr.'s bequest that established Harvard Law in the first place, but the Royall family acquired much of its fortune through the slave trade and with slave labor.

Harvard Law adopted the shield in question in 1936. It's modeled on the Royall family coat of arms. But last fall, students began to voice concerns.

A group called Royall Must Fall demanded the removal of the shield in an open letter to law school Dean Martha Minow, saying: "Physical symbols are an expression of who we are and what we value as a community. ... The most ubiquitous of these symbols, the seal—which adorns all of our buildings, apparel, stationery, and diplomas—honors a slaver and murderer."

Students on campus held several demonstrations throughout the school year calling for the removal of the shield among other things, including occupying a law school lounge for several days and protesting in the dean's office.

In response, Minow put together a committee of faculty, students, alumni and staff to help make a decision. The committee recommended the school retire the Royall family coat of arms as its shield.

The student organization who called for the removal of the symbol has yet to issue a statement on the decision, but the law school says is has already begun removing the shield from spaces on campus and online.

This video includes clips from Harvard University and Harvard Law School and images from Getty Images.