Harry Potter Gets A Christian Retelling, Minus The Magic 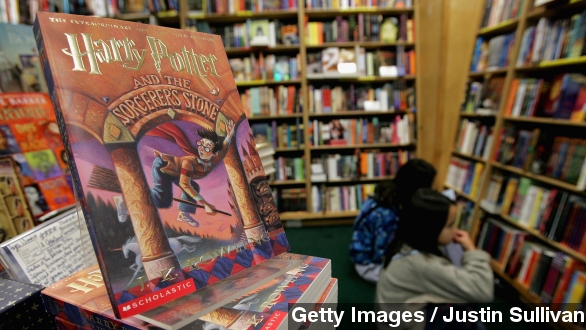 SMS
Harry Potter Gets A Christian Retelling, Minus The Magic
By Ben Lawson
By Ben Lawson
September 25, 2014
A woman has rewritten Harry Potter, dropping the magic and replacing it with Christianity, and now some are calling misogynistic.
SHOW TRANSCRIPT

Here's a riddle: what happens if you replace the magic in Harry Potter with Christianity? You end up with Holy Potter and the Half-Blood Prince of Darkness!... Ok, that was bad, but it's sort of what happened in a fan-fiction retelling of J.K. Rowling’s famous book series.

One woman has created her own version of the beloved series on FanFiction.net replacing magic with Christian values. She explains her kids asked to read the series but she didn't "want them turning into witches," so she decided to make a few changes...

...such as replacing magic with prayer, turning Hogwarts School of Witchcraft and Wizardry into Hogwarts School of Prayer and Ministry, which is run by Reverend Albus Dumbledore and his wife Minerva, a school teacher from the J.K. Rowling books demoted to a school cook in this retelling. Also, Snape is head of Gryffindor and Ron is in Slytherin.

Yeah, if you're upset over those changes you aren't alone. But what really has people upset is what some are saying are misogynistic themes.

Such this monologue from Harry on things his evolutionist aunt taught him: "She always said that pretty girls were shallow and not very smart and that a real woman put her career first and didn't care about her looks; but it only took one look at this godly young girl to realize just how wrong that was! A woman taking pride in her appearance is honoring the Lord; because after all, it is the Lord who gave her a pretty face and nice hair."

There is also this excerpt of good-natured Harry sort of trying to defend Hermione from Draco Malfoy, who is still a jerk. "Women are not stupid at all! Women should not have careers because women are nurturing and loving and their gifts serve them best in the home!"

It's doubtful Emma Watson, who played Hermione in the films and spoke recently to the U.N. on feminism, would take kindly of this.

However, the unique retelling of the story does have some asking if this whole thing is a hoax.

A writer for Religion News Service says that "the stories themselves traffic in stereotypes that, in my experience, are more typically expressed by people outside the church than people within."

The Daily Mirror shares a similar sentiment saying it could be debunked any day now.

Snopes, a site that frequently does such debunking, has yet to confirm or deny if the story is in fact "satirical or straightforward."

The site did say rumored plans to create a published set of the writings were indeed false.