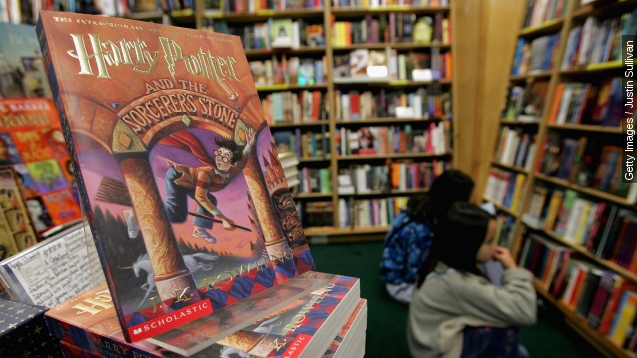 Harry Potter has scores of fans across the world. The only downside — in our American eyes — is that most of the cool stuff J.K. Rowling penned happens across the pond.

"She needs to sort out her priorities," said character Ron Weasley in the movie "Harry Potter and the Chamber of Secrets."

But now, good ol' America, land of the free, could also be considered home of the — wizard. Oh, yeah. We are serious.

Here's some background. Rowling wrote the book "Fantastic Beasts and Where to Find Them" in 2001.

The book, when mentioned in the "Harry Potter" series, was written by a fictional character named Newt Scamander. To sum it up, Rowling wrote a book about a book that a character in her book wrote.

Now, there's a movie coming out with the same title, and it will follow Scamander on his adventures "in New York's secret community of witches and wizards," collecting the information he used to write the book Potter would ultimately read in class 70 years later, IMDb.com says.

"Turn to page 394," character Severus Snape said in "Harry Potter and the Prisoner of Azkaban."

This led to a Twitter user asking Rowling if her character Scamander was going to visit a school in New York. She replied, "No, but he's going to meet people who were educated at [name] in [not New York]."

Educated at a school ... in America! We have wizards, too!

Rowling isn't giving the name of the school, saying if she did it would give away its location, but did hint that the name was of immigrant origin and that "indigenous magic was important in the founding of the school."

Rowling has been known to be as cryptic as Tom Riddle's diary. In October 2014, she tweeted out some nonsense that people on Reddit somehow deciphered to mean "Harry returns. Won’t say any details now. A week off. No comment.”

It turns out, she was really just teasing us about this upcoming Scamander movie.

And she's still teasing us, it seems. Teasing us as hard as Harry's Uncle Vernon was when he withheld those Hogwarts acceptance letters.

Entertainment Weekly took a wand wave at some locations, suggesting the school could be in New Orleans, Roanoke, New England and the southwest.

We'll be on the lookout for more cryptic tweets. Or heck, we'd even take a movie trailer at this point. The movie is due out in 2016. This is choking us up like that time Harry swallowed the snitch.

This video includes images from Getty Images and Ian Britton / CC BY NC 2.0.