Harrison Ford Opens Up About His Near-Fatal Plane Crash 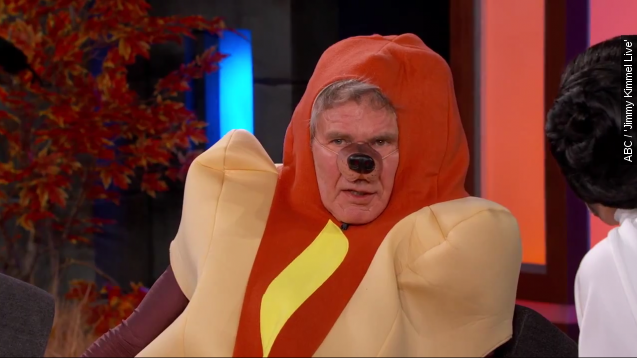 SMS
Harrison Ford Opens Up About His Near-Fatal Plane Crash
By Ben Lawson
By Ben Lawson
October 30, 2015
Harrison Ford donned a hot dog Halloween costume for his appearance on “Jimmy Kimmel Live” and opened up about the plane crash that nearly killed him.
SHOW TRANSCRIPT

"Star Wars: The Force Awakens" doesn't exactly need a lot of help to be a hit, but that doesn't mean Disney isn't going all out with the promotions. Enter Harrison Ford donning a hot dog suit for Halloween on "Jimmy Kimmel Live."

"What are you?" Harrison Ford asked on "Jimmy Kimmel Live."

But despite the silly costumes, the conversation got a little heavy when Ford opened up about his near-fatal plane crash earlier this year. The actor was piloting a vintage World War II plan when the engine suddenly went out. But thankfully, he's alive to joke about it now.

"You went down on a golf course. Did you yell 'Fore?'" Kimmel asked.

Ford explained he doesn't remember much of the crash or the following five days because of the anesthetic he was given afterwards. But hot dog, we're just glad he's okay! Get it? No? Okay.