Harris Announces $1B To States For Floods, Extreme Heat 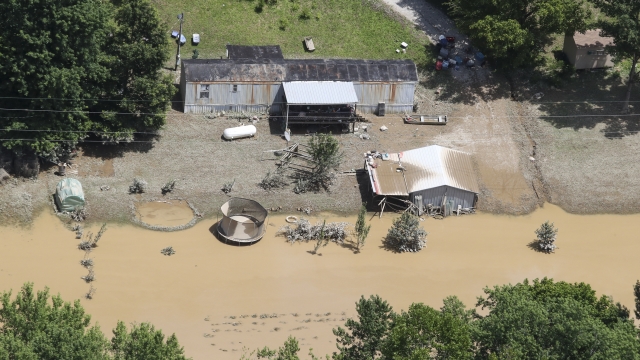 Vice President Kamala Harris called climate change an "immediate" and "urgent" crisis Monday as she detailed Biden administration efforts to respond to disasters such as deadly flooding in Kentucky and wildfires ravaging her home state of California.

In remarks at Florida International University, Harris announced more than $1 billion in grants available to states to address flooding and extreme heat exacerbated by climate change. The competitive grants will help communities across the nation prepare for and respond to climate-related disasters.

She made the announcement following a visit to the National Hurricane Center.

Harris said Monday that disasters such as the Kentucky flood and California wildfires show "how immediate, how current and how urgent the issue is of addressing the extreme weather that we've been experiencing around the country and the world."

"So to protect the people of our nation, let us understand that we can match that desire with action and that we must act now."

President Joe Biden announced last month that the administration will spend $2.3 billion to help communities cope with soaring temperatures through programs administered by FEMA, the Department of Health and Human Services and other agencies. The move doubles spending on the Building Resilient Infrastructure and Communities, or BRIC, program, which supports states, local communities, tribes and territories on projects to reduce climate-related hazards and prepare for natural disasters such as floods and wildfires.

A total of $1 billion will be made available through the BRIC program, with another $160 million to be offered for flood mitigation assistance, officials said.

"So local governments apply for these grants," Harris said. "They tell us which projects would be most impactful. And together then we build those projects."

Jacksonville, Florida, was among cities that received money under the BRIC program last year. The city was awarded $23 million for flood mitigation and stormwater infrastructure. Jacksonville, the largest city in Florida, sits in a humid, subtropical region along the St. Johns River and Atlantic Ocean, making it vulnerable to flooding when stormwater basins reach capacity. The city experiences frequent flooding and is at risk for increased major storms.

Harris said the climate crisis has exposed "generations of economic and environmental inequities that have been present in communities across our nation," adding that the administration is committed to addressing these inequities "through environmental justice."