Harington Was Seen Where 'Thrones' Tapes; Is Jon Snow Back? 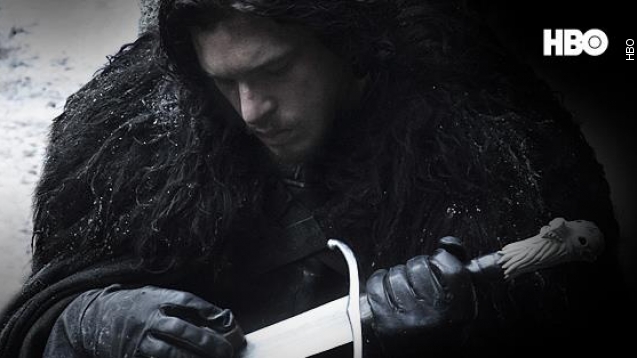 So, fair warning. This entire story is about to be "Game of Thrones" spoilers, so if you don't want to know what could be ahead for season six, go watch this video of dancing llamas. (Video via HBO)

Last season ended on a pretty tragic note: Kit Harington's character, Jon Snow, was murdered by members of the Night's Watch during a mutiny. (Video via HBO)

And while there were all kinds of speculation as to whether or not he actually died, is permanently dead or will be resurrected, director David Nutter confirmed Snow’s death to President Obama.

"Jon Snow is deader than dead," he recalled telling the leader of the free world.

But is he really dead? (Video via HBO)

Harington was spotted landing in Belfast Sunday, where he is known to film his "Thrones" scenes. To keep that rumor-mill swirling, fans weren't allowed to take pictures with him on the streets of the town.

Even more convincing? He still has his Jon Snow hair cut.

Plus, other "Thrones" cast members haven't been all that convincing, or clear, that Snow is actually dead.

"It's a 50/50 chance. There's some helpful people there," Emilia Clarke told MTV.

She's — of course — referring to Melisandre, who arrives at the Wall shortly before Snow is stabbed and has the power to bring people back to life. Even the Red Priestess wants to see Snow alive — just for a slightly more selfish reason. (Video via HBO)

Carice van Houten, who plays Melisandre, told fans at the London Film and Comic Con, "No, he can't be dead. No!"

After her character killed off Stannis Baratheon's daughter, Shireen, in a gruesome sacrificial burning at the stake, the actress received death threats on Twitter.

But fans might forgive her. After Snow's death, a Internet meme circulated with the "We will forgive you if you save Jon Snow."

Okay, so maybe Harington has outright said he's dead. But we also know he has a seventh season option in his contract. And he echoed the idea that these cast members don't ever really know what's going to happen.

He told Entertainment Weekly: "If anything in the future is not like that, then I don't know about it. … But I've been told I'm dead. ... I'm not coming back next season."

If one thing's for sure, being dead is not always a permanent death in "Thrones," and if Snow does come back, this will have been the worst-kept secret ever.