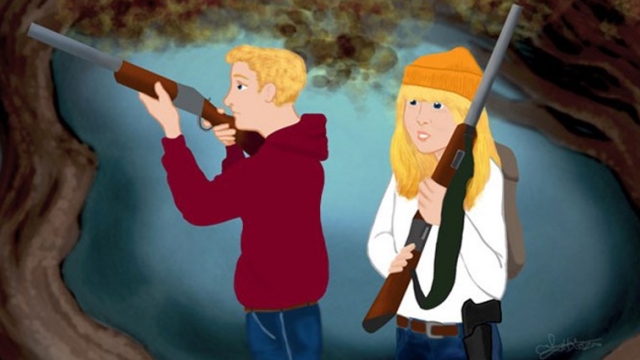 Remember when your mom used to read you the classic about the wolf and the shotgun-toting grandma? No? Well, the National Rifle Association teamed up with a conservative author to make that fairy tale happen.

New gun-friendly twists on old favorites are published on the NRA's family-oriented sister site NRA Family. The group said the new stories are part of an attempt to make sure children learn how to use firearms responsibly.

An editor's note on the site adds, "Have you ever wondered what those same fairy tales might sound like if the hapless Red Riding Hoods, Hansels and Gretels had been taught about gun safety and how to use firearms?"

"The stories are also for adults, and it's all about safety, and it's for parents to start those conversations," author Amelia Hamilton told CBS.

The first of the series, "Little Red Riding Hood (Has a Gun)," was published in January. The big twist is that just as the wolf is about to make Grandmother his snack, she points her shotgun at him. (He came across Red Riding Hood earlier, who also had a gun.)

"Hansel and Gretel (Have Guns)" puts the famed twosome out hunting when they find the old witch's house. Instead of becoming victims, the siblings free trapped children while training their guns on the witch.

No one gets shot in either of the stories — they are for kids, after all. But the retellings are definitely firing up gun control advocates.

The president of the Brady Campaign to Prevent Gun Violence told the press: "The NRA continues to stoop to new lows in the hopes of shoving guns into America's youngest hands. It must now advertise deadly weapons to kids by perverting childhood classics with no regard whatsoever for the real life carnage happening every day. To be frank, it's pathetic."

According to the The Washington Post, a "Three Little Pigs" rewrite is on its way. One thing's for sure: That wolf will need more than just some hot breath if he's facing three armed little piggies.

This video includes images from Getty Images and clips from the National Rifle Association.