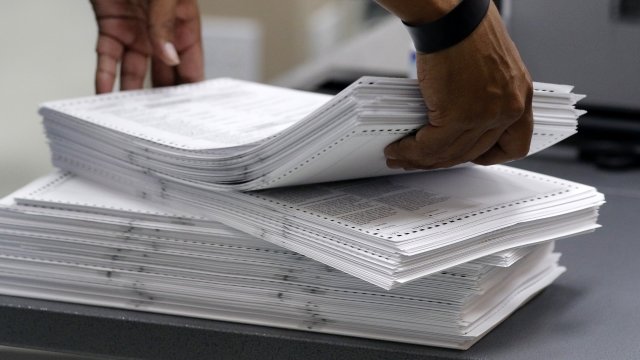 Florida's secretary of state has ordered a hand recount in the state's U.S. Senate race.

That race has been too close to call since the Nov. 6 election. A machine recount that ended Thursday showed Republican Gov. Rick Scott leading incumbent Democratic Sen. Bill Nelson by less than 13,000 votes. That margin of 0.14 percent triggered the manual recount.

That's not the case for the state's gubernatorial race. Unofficial recount results show Republican Ron DeSantis maintaining a lead of nearly 34,000 votes over Democrat Andrew Gillum. Gillum says he will not concede until all ballots are counted.

Part of the holdup here is that some ballots were rejected because of mismatched signatures on mail-in and provisional ballots. Earlier Thursday, a federal judge ruled voters could have extra time to fix those signatures. That ruling affects some 4,000 ballots that were rejected.

It's important to note that the manual recount for the Senate race won't recount every ballot cast. Instead, it will look at ballots that didn't get counted by machines because voters either didn't mark down a choice for the race — known as an undervote — or selected multiple candidates — which is called an overvote. The manual recount results are due by noon on Sunday.