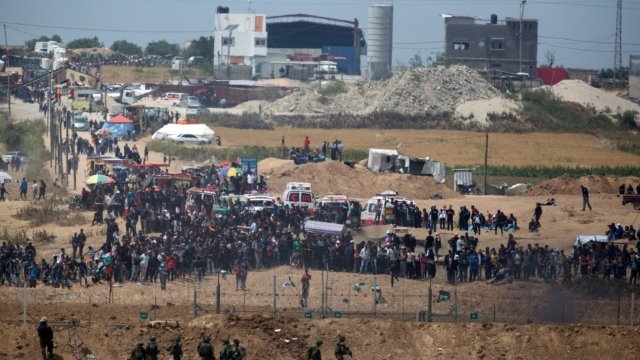 SMS
Hamas Official Says Cease-Fire Reached With Israel
By Katherine Biek
By Katherine Biek
May 30, 2018
News of a potential truce comes after Israel says it conducted a series of airstrikes in Gaza, targeting military compounds and other buildings.
SHOW TRANSCRIPT

Armed Palestinian groups in Gaza have reportedly agreed to a cease-fire with Israel, according to a Hamas official.

That official said in a statement that Hamas will commit to the truce as long as Israel does. Al Jazeera reported Egyptian mediators helped broker the cease-fire.

But on Wednesday, some Israeli ministers denied such an agreement had been reached. Though an unnamed senior defense official told reporters that Israel was willing to stop further attacks on Gaza as long as Palestinians did the same.

This news of a potential cease-fire comes after Israel Defense Forces said dozens of rockets and mortar shells were fired from Gaza into Israel Tuesday. Several people were reportedly injured.

In retaliation, the IDF said it conducted a series of airstrikes in Gaza, targeting military compounds, training facilities and munitions manufacturing sites.

The U.S. called for an emergency United Nations Security Council meeting to "discuss the latest attacks on Israel out of the Gaza Strip by Hamas and other militants." That meeting is expected to take place Wednesday afternoon, according to the U.S. Mission to the UN.