Hamas Leader Hints Gaza Protests Are Going To Get Worse 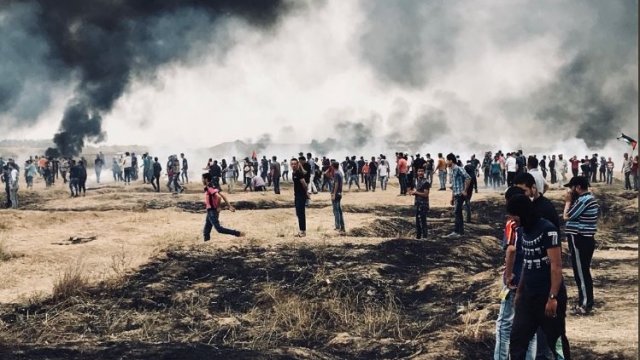 SMS
Hamas Leader Hints Gaza Protests Are Going To Get Worse
By Jake Jones
By Jake Jones
May 10, 2018
May 15 is "the day of catastrophe," when Palestinians commemorate their displacement from what is now Israel.
SHOW TRANSCRIPT

The leader of the Gaza Strip, a top-ranking Hamas member, foreshadowed a bloody confrontation between Palestinians and Israeli soldiers as weeks of border protests come to a head.

Gazans have been rallying along the border with Israel every Friday for weeks. It's all leading up to what Palestinians call the day of catastrophe, the anniversary of the displacement of their people from what's now Israel.

That's on May 15. On May 14, the U.S. is set to open its embassy in Jerusalem, a move strongly opposed by Palestinians.

The weekly protests have left dozens dead. Israel has reportedly used live ammunition against protesters it says pose a threat, usually when they're trying to cross into Israel.

Hamas leaders have called for a wave of Palestinians to enter Israel in the final days of the protest in what they're calling the "Great March of Return."