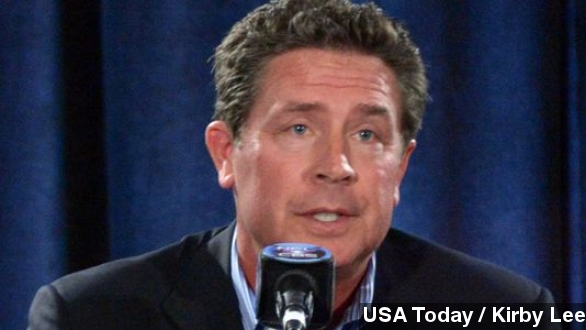 By Matt Moreno
June 3, 2014
The former Miami Dolphins QB was reportedly put on the list of players suing the NFL over concussions by mistake.
SHOW TRANSCRIPT

Former Dolphins' QB Dan Marino is suing the NFL over concussions he sustained while playing ... or was suing I guess we should say.

"The news broke less than 24 hours ago that Dan Marino's name was on a list of 15 former players on this lawsuit right here ... Here we are, a day later. Marino is reportedly saying the whole thing is a mistake." (Via WPLG)

Yes, according to reports, Marino was "mistakenly" put on a list of players who filed a lawsuit against the NFL Monday.

A source explained to the Sun Sentinel, "It was never Marino’s intention to initiate litigation in this case, but to ensure that in the event he had adverse health consequences down the road, he would be covered with health benefits. They are working to correct the error."

But, ESPN's Ed Werder tweets, this change of heart may actually have to do with his potential job with the league.

Werder tweeted that with the lawsuit in place, a potential job position with the Miami Dolphins for Marino may have been "jeopardized." (Via Twitter / @Edwerderespn)

Of course, the NFL is no stranger to concussion-related controversy by now. The league and former players are currently revising a $765 million agreement the NFL said it'd pay to former players. A judge halted the agreement though, saying it may not go far enough.  (Via NBC)

Yahoo points out that even without this separate lawsuit with Marino's name on it, he would be covered under that $765 million one anyway. Eric Edholm writes, "So basically, Marino wanted to be protected financially — and quietly so — without the public backlash."

There's currently no timetable for when the NFL and former player's large-summed agreement could be settled.