Half Of The 'Second Caravan' Leaves Mexico City 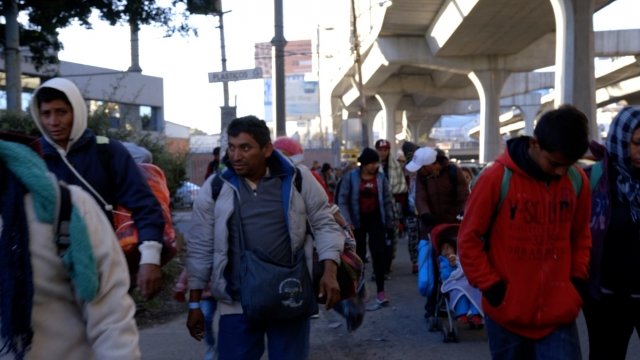 SMS
Half Of The 'Second Caravan' Leaves Mexico City

By Sebastián Martínez Valdivia
November 16, 2018
The group that left took the metro to northwest Mexico City, where they waited for buses, before deciding instead to continue on foot.
SHOW TRANSCRIPT

We're here at the Estadio Palillo Martínez, an open-air stadium in Mexico City which up until this morning housed some 2,500 people from Central America. This morning that number dropped as the group split and more than half left to continue their journey north.

Around 5 a.m., members of the so-called "Second Caravan" left the stadium where they'd sheltered for the past few days, to follow in the footsteps of the first caravan, which attracted the president's attention before the election. Some 1,300 people in all boarded trains and made the hourlong trip to the municipality of Naucalpan, where they waited for instructions in the cold.

"We're waiting for more people and for the man who's leading us, David. He told us to wait for him here."

Maritza Sarmiento and Melida Salazar, who traveled to Mexico City from Honduras, said a man named David from the group Pueblos Sin Fronteras had been their group's guide since they got to Mexico. That's the same activist group that has guided the original "caravan" that is now reaching the U.S. border.

But on Friday morning there was confusion at the metro station. Some people said they were waiting for buses to take them to the town of Querétaro, more than 100 miles to the northwest of Mexico City. Eventually, after those buses failed to materialize, the group made for the highway. By Friday afternoon, members of the group had reportedly made it to Tepotzotlán, 25 miles north of where they started the day.

Back at the stadium, around 1,200 people decided to stay behind. Some people told me the split in the caravan happened because of friction between leaders of the Salvadoran and Honduran contingents in the group. But I also found several Hondurans who had stayed behind for other reasons. Volunteer coordinator Francisco Martínez Toledo said the reality is that there isn't just one clearly organized caravan, but disparate groups that have traveled together.

Nevertheless, the people who stayed behind told me they had a common reason for doing so. On Wednesday night, noted human rights activist father Alejandro Solalinde visited the stadium and said a Canadian archbishop would be visiting Saturday to talk about transporting asylum-seekers to Canada instead of the U.S.