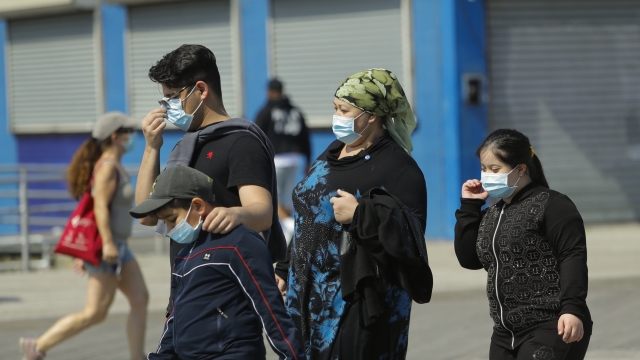 “We have different levels of infection across the state hence the variance in opening times,” New York Gov. Andrew Cuomo told reporters on Thursday in Syracuse.

Cuomo is requiring regions to meet seven metrics before reopening, including a 14-day decline in total hospitalizations and deaths, minimal new hospitalizations— fewer than two per 100,000 residents — at least 30% of hospital and ICU beds available, diagnostic testing capacity of 30 tests per 1,000 people per month, and the ability to conduct contact tracing.

As of Friday, five New York regions met those metrics, but another five, including New York City, Long Island, Westchester, and Albany, did not.

“If a region hits its benchmark at any time regardless of the pause order, then that region can open,” Cuomo told reporters in Albany on Friday.

These regions can now enter "Phase 1" of a reopening. Construction, manufacturing, curbside retail, wholesale trade, along with agriculture, forestry, fishing and hunting, are all allowed to resume, but only with appropriate PPE and social distancing.

Further phases of reopening restaurants and retail, however, are not yet on the table.

“The indicators have been moving pretty damn well,” New York City Mayor Bill DeBlasio told reporters Thursday. “Not quite as well as I want them to, but pretty damn well. We are getting in range of hitting all our numbers by the first half of June."

As for New York City, lockdown measures remain in place, but state beaches will reopen at 50% capacity for Memorial Day. Governors across the Northeast are hoping to avoid a surge of New Yorkers to nearby states with open beaches.

“We are one multistate region,” Cuomo said on Friday. “What one state does will affect other states.”

The announcement comes a day after New Jersey Gov. Phil Murphy declared the Jersey Shore would reopen for Memorial Day.

“We can do it in a way that is consistent with protecting the public health of every beachgoer,” Murphy explained Thursday.

A slow reopening, aiming to help continue flattening the curve, especially in the tri-state area.