Haley: The US 'Is Not Looking To Do Regime Change In Iran' 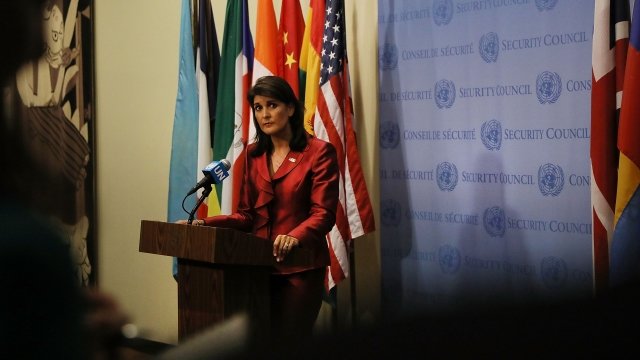 SMS
Haley: The US 'Is Not Looking To Do Regime Change In Iran'

Despite rising tensions between the U.S. and Iran, Ambassador to the U.N. Nikki Haley says the U.S. is not trying to foment revolution there. She told CNN's "State of the Union" on Sunday, "The United States is not looking to do regime change in Iran."

Her comments come ahead of the U.N. Security Council's Wednesday meeting on Iran, which President Donald Trump will chair.

The Trump administration escalated tensions with Tehran when it pulled out of the Iran Nuclear Agreement in May and reimposed sanctions. Since then, both countries have accused each other of backing proxies to undermine stability in the region.

Trump's lawyer Rudy Giuliani said Saturday the U.S. would take advantage of the unrest economic sanctions have caused in Iran and overthrow the government there.

Haley contradicted those claims, saying the U.S. was "not looking to do regime change anywhere."