Haley Fires Back At Suggestion She Was Confused About Russia Sanctions 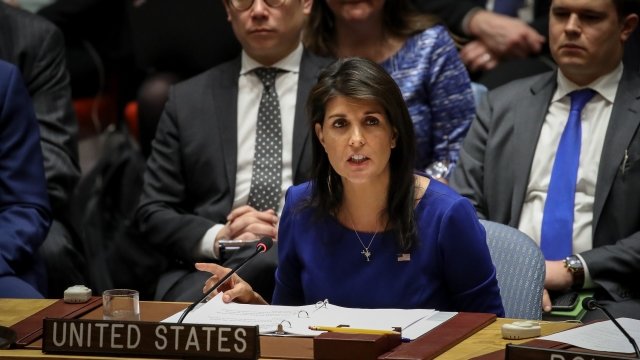 SMS
Haley Fires Back At Suggestion She Was Confused About Russia Sanctions
By Katherine Biek
By Katherine Biek
April 18, 2018
Over the weekend, the U.S. ambassador to the United Nations said new sanctions against Russia were imminent.
SHOW TRANSCRIPT

In a statement obtained by multiple news outlets, Haley said, "With all due respect, I don't get confused."

Over the weekend, Haley told "Face the Nation" that additional Russia sanctions would be announced Monday at the latest.

He later apologized to Haley, telling The New York Times, "As it turns out, she was basically following what she thought was policy. The policy was changed and she wasn't told about it."

As Newsy previously reported, President Donald Trump decided to hold off on additional Russia sanctions because he had some concerns.