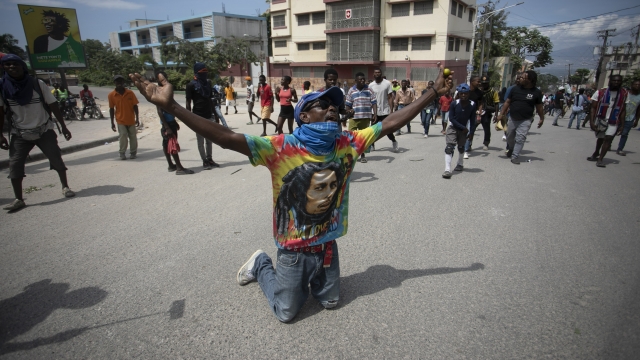 Haiti's Prime Minister has called for international aid, including foreign armed forces, to help the country in the midst of a humanitarian crisis.

Unrest is growing in Haiti’s capital weeks after the government announced steep hikes to fuel prices on the island, despite fears it could cause an already frail economy to collapse and inflation that has soared to over 30%.

“We've been suffering for a long time,” a local resident and protester said. “The cost of living is too high, and we don't have enough to eat. We've been in the streets for days, and they don't understand our demands.”

This week, Haitian Prime Minister and Acting President Ariel Henry called for international aid to help the Caribbean Island, as Haiti’s most powerful gang has blocked access to the country's largest fuel terminal, vowing not to move until the Prime Minister steps down, and prices for fuel and basic necessities decrease.

“The people are on the streets demanding schools, health, security; we want infrastructure, and we will continue to mobilize,” said a protester.

Ten flights arrived in Haiti from Sunday to Tuesday in planes designed for 135 passengers, according to Haitian officials.

Gasoline can only be found on the black market at the whopping cost of $30 U.S. per gallon.

The scarcity and risings costs have forced many businesses to shut down, including hospitals, a water bottling company, and key services, as health authorities announced the poorest country in the western hemisphere may now be in the grips of a cholera outbreak, likely the result of contaminated water.

Health officials say nearly a dozen people have died of the illness since last Friday.

Camille Chalmes, a professor of economics and sociology at Haiti’s State University, says the demonstrations are a response to what has become an un-survivable situation.

“It is an unacceptable situation in the face of what the population is going through. They confronted Prime Minister Ariel Henry for raising the price of gas,” Chalmes said. “It is understandable that the population took to the streets to block this plan of death; this is an attack against their vital interests and even against their survival.”

Political instability has risen in Haiti since the 2021 unsolved assassination of Haitian President Jovenel Moïse.

The acting president told the United Nations General Assembly back in September that he will hold elections as soon as it’s safe to do so. But demonstrators vowed to keep putting pressure on Haiti’s government.

"The people's fight will not stop; we will continue to mobilize no matter where Ariel Henry, the puppet is. We will find him,” said a local resident and protester.

It's unclear what, if any, involvement the U. S. will have in a peacekeeping mission in Haiti. However, the White House has urged all Americans in Haiti to leave due to the insecurity