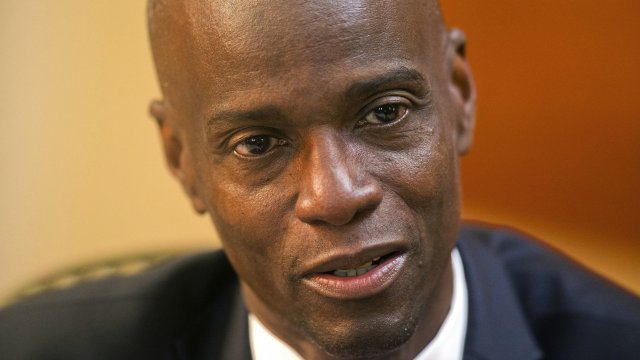 SMS
Haiti In Turmoil After Assassination Of President Jovenel Moïse
By Ben Schamisso
By Ben Schamisso
July 7, 2021
Authorities closed the international airport and declared a "state of siege" hours after the controversial 53-year-old president was assassinated.
SHOW TRANSCRIPT

The assassination of Haitian President Jovenel Moïse has shocked the world and local residents alike.

A woman who lives near Moïse didn't want to give her name for safety reasons. She says even though she had serious issues with the president, she's stunned he was killed "just like that."

Another neighbor says he heard a loud sound and thought it was an earthquake.

Authorities closed the international airport and declared a "state of siege" hours after the controversial 53-year-old president was assassinated.

Interim prime minister Claude Joseph called for calm. But many fear Moïse's killing could further destabilize a country with a long history of political unrest.

"I must tell you that I was under shock," said Bocchit Edmond, the Haitian ambassador to the United States.

"Now we're talking about mercenaries, foreign mercenaries, possibly there will be some internal hands and accomplices, but we will leave that to the investigation," he said.

The White House says it's still gathering information on what happened but is "prepared to assist" the people of Haiti.

"We need a lot more information but it's very worrisome about the state of Haiti," President Biden said.

Moïse, a college-educated entrepreneur who took office in 2017, has been ruling by decree for more than a year after the country failed to hold elections. In February, he had 23 opponents arrested claiming they were plotting to kill him.

His critics took to the streets in recent months, calling for his resignation.

Joseph, the interim prime minister, has imposed martial law and says he's now in charge of the country.  But it's unclear how much control he has or how long it will last.