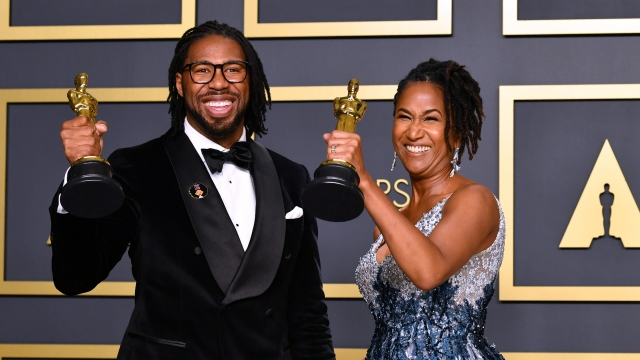 "Hair Love" is a short film about a black father styling his little girl's hair for the first time. And now the heartwarming little movie has a big prize: the Oscar for best animated short.

Matthew A. Cherry, who wrote, directed and produced the film, says it showcases the complexities of black families in a positive light. He says he aims to tell "slice of life" stories about small moments that people wouldn't usually look twice at.

"I just want to say that 'Hair Love' was done because we wanted to see more representation in animation, we wanted to normalize black hair."

Cherry said he was inspired by a photo of a black father doing his daughter's hair, and then viral videos on social media of those special moments gave him an "aha" moment.

"I was like, light bulb over the head. Like, this is the idea, you know. It just felt like a good opportunity to do a lot of different things at once, to have characters that look like young kids that I know who never really get a chance to see characters that look like them that they can be proud of — that's proud of their hair, to also center [on] a black family in animation, which at the time in 2017, that was so rare. And then also, lastly, just to normalize black hair."

Cherry and his team brought along DeAndre Arnold, who made national headlines when he told CBS News he was suspended from school for wearing his hair in dreadlocks.

"There's a very important issue that's out there, it's the CROWN Act, and if we could help get it passed in all 50 states it would help stories like DeAndre Arnold's, who's our special guest tonight, stop happen."

The CROWN Act is legislation banning discrimination against people who wear their natural hair texture or protective styles. In some instances, people who have worn afros, braids or dreadlocks have been deemed "unprofessional" at school or at work.

"It shouldn't even be a conversation that kids — black kids, brown kids, kids that don't have straight hair — should be able to wear their hair however they choose."

So far, the CROWN Act has only been implemented in California; New York; Montgomery County, Maryland; and New Jersey.

"You know, it's crazy that a law has to be passed in order for us to wear our natural hair without there being a conversation about it. But I'm glad it's happening, and we're really excited and proud that 'Hair Love' can be a part of that conversation and help get it on the national stage."

Cherry pursued his passion for storytelling after playing in the NFL. He's only the second former professional athlete to win an Oscar. The first was NBA legend Kobe Bryant, who took home the Academy Award for his animated short "Dear Basketball" in 2018. He shouted out Cherry on Twitter less than two weeks before his sudden death in January. Cherry told Newsy he felt a huge responsibility to maintain Bryant’s legacy and was honored to give him well deserved recognition at the Oscars.

"This award is dedicated to Kobe Bryant. May we all have a second act as great as his was. Thank you."

Cherry says that often, pro athletes aren't taken seriously in their pursuits outside of sports. But he said he's been interested in creative writing and media production since grade school. He hopes "Hair Love," which was also made into a children's book, will change lives.

"One of the biggest things we hear from adults is that they wish they had a story like that back when they were kids, because it maybe would've helped them love their hair a little sooner. Because, as you know, black hair is complicated sometimes, and we all go through our own individual hair journeys," he said. "It was just a message a wanted to put out there for my future kids so that they would live in a world where they wouldn't have to worry about these same conversations."