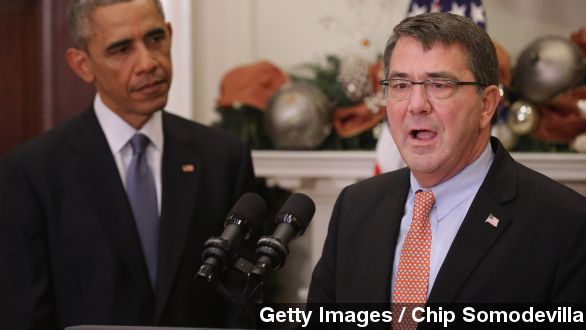 SMS
Hagel Silent On Absence From Defense Secretary Announcement
By Jake Godin
By Jake Godin
December 5, 2014
President Obama has nominated Ashton Carter as the next secretary of defense. But perhaps highlighting some inner drama, Chuck Hagel was a no-show.
SHOW TRANSCRIPT

What was unofficially revealed earlier this week was officially announced Friday: Hagel's out. Carter's in.

President Obama said, "Today, I'm pleased to announce my nominee to be our next secretary of defense, Mr. Ash Carter."

Ashton Carter was expected to be Obama's choice as outgoing Defense Secretary Chuck Hagel's replacement after White House officials leaked the pick to media earlier in the week.

While Carter won't come with the same military service credentials Hagel brought, he's well-known in Washington for both his academic accomplishments and extensive knowledge of the Pentagon. (Video via U.S. Department of Defense)

Part of that reputation stems from his push for troop safety. Speaking with The Washington Post, one retired general credited Carter with saving the lives of "hundreds, perhaps even thousands" of troops thanks to his work. (Video via U.S. Department of Defense / SSG Daniel Sullivan)

He's also got supporters on both sides of the aisle, meaning his confirmation in the Senate should go through without much hassle.

Carter told President Obama: "If confirmed in this job, I pledge to you my most candid strategic advice. And I pledge also that you will receive equally candid military advice."

Still, not everything went quite so smoothly for the White House on Friday. Hagel, who Obama said would be present for the nomination, was nowhere to be seen.

Although he did release a statement supporting the nomination and calling Carter "a patriot and a leader." He does not say why he wasn't present.

A Pentagon official told CNN Hagel decided not to come simply because he didn’t want to detract from what was supposed to be Carter’s day.

A writer for Time called his absence just "the latest in a string of snafus" and that to Pentagon officials, "such drama is often seen as a national-security team fumbling the ball."

Hagel has promised to continue his position until Carter is confirmed by the Senate, which The Hill notes probably won't happen until next year.