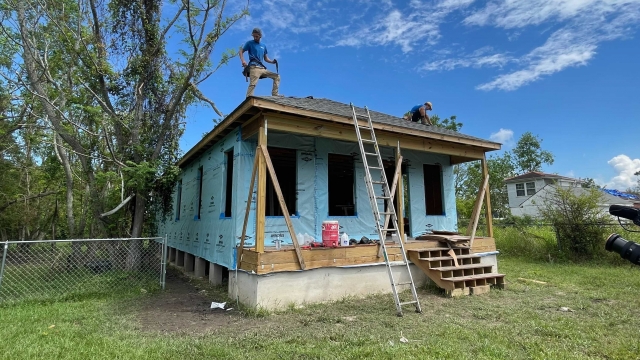 After Hurricane Katrina, many New Orleanians were looking for a pathway home. Some found that pathway with Habitat for Humanity.

Music fills the air in a New Orleans neighborhood. Habitat for Humanity homeowner and singer Margie Perez is the voice behind the tune. Hurricane Katrina forced her to cut and run, but she had too much love for the city to stay away.

"I was still evacuated, and I read an article about it and I was like, 'As soon as I get back, I'm going to apply,' you know, because I was living uptown. I lost everything," she said.

Perez lives in the musician's village in the city's lower 9th ward.

"It took me 10 years to move here, but I finally did," she said. "And, you know, this was an opportunity for me to not only rebuild my home but rebuild my life."

After Hurricane Katrina, many New Orleanians were looking for a pathway home. Some found that pathway with Habitat for Humanity. Now, after buying a Habitat home, some people tell Newsy it was like they're living the American dream — a ray of sunlight after a dark storm.

Adrian Pouge says owning this home allows her to provide for her son now — and in the future.

"You got a piece of the American dream," she said. "Something to leave to them in case anything was to happen to you. You have something to start them off."

"That was my main goal," he said. "To be able to make sure that my children would always have a roof over their head no matter what."

Marguerite Oestreicher heads the nonprofit for the New Orleans area. Newsy met with her during a rough week. The organization, known for helping others, needed help themselves after Hurricane Ida.

The scene took many employees back to Hurricane Katrina. After that storm, Habitat ramped up building.

"Hundreds of thousands of people were displaced and if you didn't live through it, it is hard to get your head around the magnitude of, you know, an entire city being flooded because like 80% of the homes here were damaged or destroyed," Oestreicher said. "If we weren't able to get our culture-bearers back, if we weren't able to get the people who grew up here and lived here their whole lives back, this city would never recover."

Perez is a bit of a celebrity magnet. She's met Branford Marsalis and Harry Connick Jr. — who helped shape the idea of the musician's village; former President Barack Obama — which led to her opening for him during the Democratic National Convention; and former President Jimmy Carter — who's made Habitat his pet project since leaving the White House and even gets in on builds himself, which is a stark difference from the homes actor Brad Pitt constructed after Katrina.

Director of construction for Habitat, Brad Holland, took Newsy through one of the homes volunteers are helping to build in the Lower 9. For neighbors, it means less tall grass and blight in their neighborhood.  For the city, it means the tax base is growing.

Oestreicher said they too will rebuild and come back stronger — much like the 700-plus homes they've built in the city since Habitat's founding.