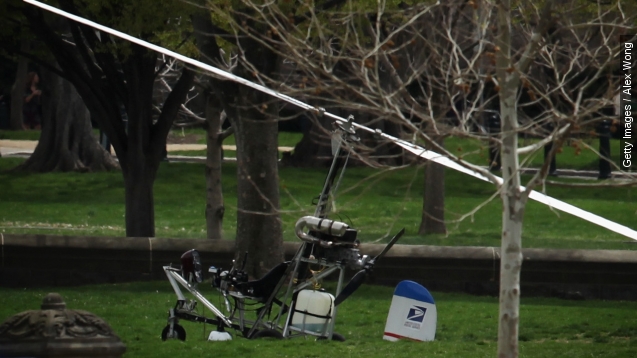 SMS
Gyrocopter Pilot Faces 9.5 Years For US Capitol Landing
By Steven Sparkman
By Steven Sparkman
May 20, 2015
Doug Hughes landed his gyrocopter on the Capitol lawn last month to deliver letters of protest to Congress. Wednesday we learned the possible penalty.
SHOW TRANSCRIPT

The man who landed a gyrocopter at the U.S. Capitol last month, setting off a security scare, faces nearly a decade in prison.

Doug Hughes, a 61-year-old mailman, brought letters for each member of Congress with him as an act of protest. He hadn't made his plan much of a secret, either, giving interviews to the Tampa Bay Times.

Wednesday, we finally learned what the  stunt might cost Hughes. He faces six charges including two felonies that altogether could add up to as much as 9.5 years behind bars.

Hughes' flight hasn't been forgotten on Capitol Hill. Just hours before the charges were announced, Capitol Police Chief Kim Dine was grilled about the incident in Congress, with one representative saying the Capitol should have been evacuated. (Video via C-SPAN)

"Our guys and gals do a great job of making the arrest, but we'd rather not be there," Rep. Rich Nugent said.

He hasn't been far from the cable channels, either. His stunt played into ongoing stories about national security and the state of American democracy, and he gave an exclusive interview to Fox News' Sean Hannity this week.

"Did you know that it was illegal for you to do this?" Hannity asked.

He even had a USA Today reporter with him as he went to court Wednesday.

"Unless I get lucky and this is dismissed, I'm going to wind up before a jury of my peers. And that doesn't bother me," Hughes said.

Hughes also paid another price for his flight: He says he doesn't expect to see his gyrocopter ever again.