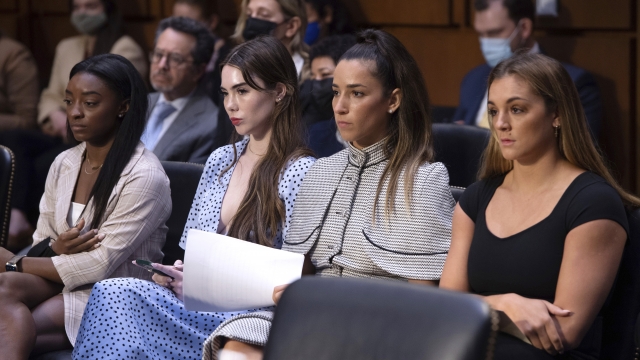 SMS
Gymnasts Say The FBI Mishandled Nassar Abuse Allegations
By Amber Strong
By Amber Strong
September 15, 2021
An IG report says one of many failures was due to confusion whether the Indianapolis office had venue since Nassar's abuse took place in other places.
SHOW TRANSCRIPT

"To be clear, I blame Larry Nassar and I also blame an entire system that enabled and perpetuated his abuse," Olympic gymnast Simone Biles said.

Former and current athletes were addressing the Senate over the bureau's handling of abuse allegations from former team doctor Larry Nassar.

"I then told the FBI about Tokyo and the day he gave me a sleeping pill for the plane ride so he could work on me that night. That evening I was completely alone, naked, with him on top of me molesting me for hours," former Olympic gymnast Mckayla Maroney said. "I was so shocked at the agent's dead silence and disregard for my trauma. After all of that he asked, 'Is that all?'"

Wednesday's Judiciary hearing is a follow-up to a July inspector general’s report that says the FBI Field Office in Indianapolis was notified of Nassar’s abuse in the summer of 2015.

Investigators say over the next 6 weeks the field office conducted "little follow up" and ultimately failed to open a formal investigation.

"After telling my entire story of abuse to the FBI in the summer of 2015, not only did the FBI not report my abuse. But when they eventually documented my report 17 months later they made entirely false claims about what I said," Maroney said.

The IG report says one of the many failures was due to confusion as to whether the Indianapolis office had venue since Nassar's abuse took place in other locations.

But even after being advised to send the case to a team in Michigan, where Nassar worked, the agent failed to do so. All the while, Nassar was still working and abusing young athletes, about 70, according to the IG.

Inspector General Michael Horowitz said, "It wasn't until August 2016 when Michigan State University police received a separate sexual assault complaint from another gymnast and in September 2016, the next month, the MSU police department executed a court-authorized search of Nassar's residence."

FBI Director Christopher Wray says when he took over the bureau, corrective actions were taken including changing the way agents conduct interviews with potential victims.

He also says the agent at the center of the case was recently removed.

"It's my commitment to you that I and my entire senior leadership team are going to make damn sure everybody at the FBI remembers what happened here in heartbreaking detail," Wray said.

However, lawmakers and victims say that's not enough and are calling for criminal charges against the agent and others involved.

"It's troubling to me to see that an FBI agent who lied, broke the law, knew he was breaking the law and nothing happens," Sen. Patrick Leahy said.

So far the Department of Justice has declined to file charges.