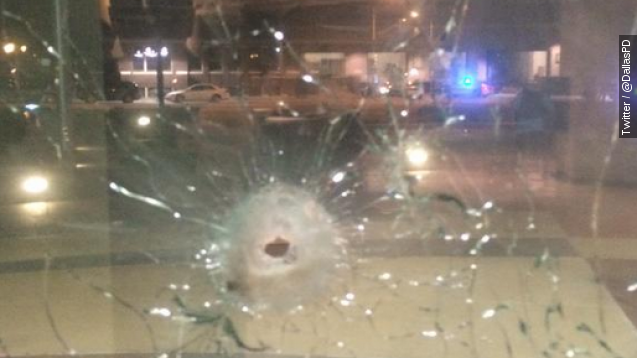 "Oh, shoot. It's going to hit that cop car," one witness said in a video posted to Twitter.

"Oh my God!" another witness said.

That gunfire continues for a full 12 seconds after you hear the initial shots as the suspect's van pulls away from the scene.

The Twitter user who posted the video told media outlets both the suspect and police fired on each other, but the suspect fired first. These are pictures the Dallas Police Department posted to Twitter of the damage at police headquarters.

After that shootout, police say the gunman drove to a fast food restaurant parking lot south of Dallas, opened fire again and then spoke briefly with police negotiators before going silent. Police say no officers were hurt in either shootout. (Video via KXAS)

"The suspect has told our negotiators that we took his child and we accused him of being a terrorist and that he's going to blow us up," Dallas Police Chief David Brown said during a press conference early Saturday. (Video via WFAA)

Much of what the police chief told reporters in that first press conference was based on witness accounts, like the description of an armored van and a total of four possible suspects, some firing from elevated positions.

"Oh!" a witness said in a video posted to YouTube.

"Look at that!" another witness said.

However, police later said they think the one gunman fired from different locations leading up to his confrontation with officers.

Police also say they found two bags around police headquarters with explosives inside, one under a police vehicle. As the department's bomb squad tried to detonate them, one blew up on its own.

Late Saturday morning after having no contact with the suspect for hours, police accessed the van, set off water charges to make any more possible explosives inside inert and found the suspect dead. While the suspect gave a police negotiator a name, police say they're trying to confirm his identity.