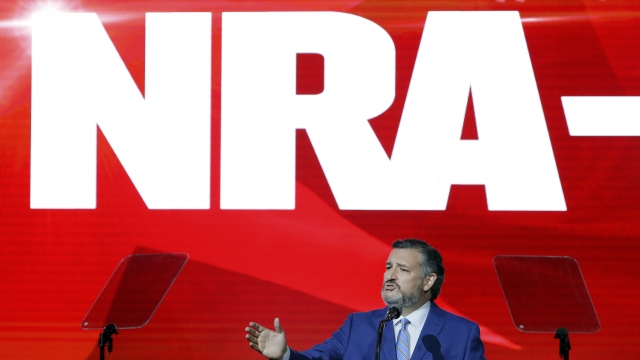 A convoy of buses made its way down the streets of Houston.

At first glance, you might even mistake the mile-long row of yellow school buses for those you see every day, picking up and dropping off kids at school.

But these buses serve a very different purpose.

They stand as a dark reminder of children who never made it on the bus back home.

It's called the NRA children's museum: a mobile museum of 52 empty school buses with 4,368 empty seats. Each seat represents a life lost to gun violence since 2020.

On some seats, you'll find the picture and name of one of those kids, along with where they died.

Alongside them: small keepsakes and reminders of full lives senselessly cut short.

The artist behind the project, Manuel Oliver, knows the pain embodied in each empty seat. Each serves as a reminder of his son, Joaquin, who was killed in the Parkland shooting at Marjory Stoneman Douglas high school in 2018.

A striking reminder of that AR-15 could be seen from the sky.

Manuel and Patricia Oliver are the co-founders of "Change The Ref", a gun-reform organization using art to showcase the impact of mass shootings and call for legislative change.

The Yellow Bus Project aims to call out the dozens of pro-gun lawmakers who receive support from the NRA.

Manuel, said, in part: "we are showing American voters the toll these politicians have taken on our children's lives with this all-too-real archive."

The convoy's route included a drive by the office of one of those pro-NRA senators, Ted Cruz.

The convoy stopped to drop a letter about gun reform written by Joaquin. Manuel called on Senator Cruz to "start prioritizing kids over the NRA's money."

"There's a business model in here. Our legislators are a part of it. There's gun manufacturers, and the gun industry that has the blessing of these people that are supposed to put a stop of this," Oliver said.

Some Democratic senators are of the same mind as Oliver.

As for Manuel, he says he has no plans of resting until the gun lobby does.

"Every time you see a line of school buses, there's a big chance it's us with the children's museum because this museum is going to travel all around the nation. We won't stop here. This is just the first stage," Oliver said.