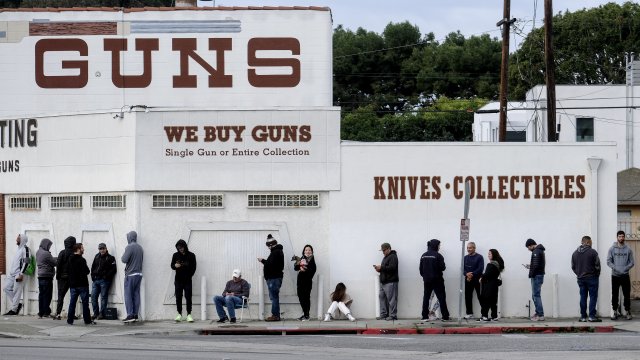 SMS
Gun Shops Deemed 'Essential' Business Amid Pandemic
By Johannah Grenaway
By Johannah Grenaway
March 31, 2020
While it's not a mandate, it is guidance to keep them open along with grocery stores, pharmacies and hospitals during the COVID-19 outbreak.
SHOW TRANSCRIPT

As businesses temporarily shut down to curb the spread of the global coronavirus pandemic, the Trump Administration has deemed gun shops "essential" businesses that should remain open. While it's not a mandate, it is guidance to keep the shops operating along with grocery stores, pharmacies and hospitals.

This comes after some states and municipalities have tried to close gun shops, deeming them "non-essential businesses," and have gotten push back from gun rights groups. On Friday the NRA sued California Gov. Gavin Newsom and argued that closing gun shops was a violation of the Second Amendment.

The National Shooting Sports Foundation says "hundreds of thousands, even millions of Americans" have exercised their Second Amendment right to bear arms "to ensure their safety and the safety of loved ones during these uncertain times." The foundation's Senior vice president and general counsel told the Associated Press, "Americans must not be denied the ability to exercise that right to lawfully purchase and acquire firearms during times of emergency."

The Brady gun violence prevention group countered that closing gun shops is "a public health issue, not a Second Amendment issue." It's chief counsel said, "The fact is that guns, the nature of guns, require that they be sold with a lot of close interaction. They can’t be sold from vending machines, can’t be sold with curbside pickup."

He also said the gun lobby was "not willing to stand for a few days or a few weeks of less profit in order to protect public health, and it’s outrageous and definitely not required by the Second Amendment."

A recent poll by Newsy/IPSOS showed that 1 in 20 households have bought a gun in response to the COVID-19 outbreak.

Additional reporting by Lisa Marie Pane of the Associated Press.