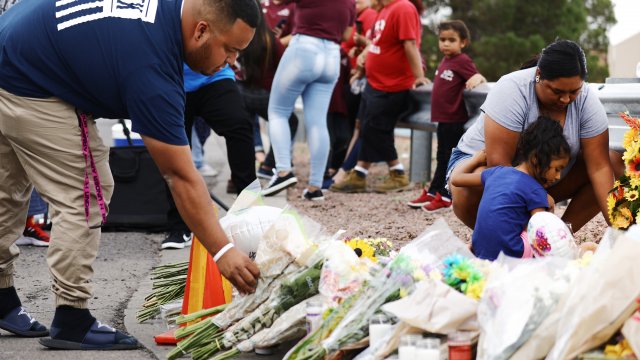 "I’m pleased to note that all of the candidates are talking about this issue. What I’d like them to do is more of them really articulate comprehensive plans for how they’re going to address the epidemic of gun violence," said Kris Brown, who is president of the Brady Campaign to Prevent Gun Violence.

"Certainly the Democrats should be talking about this a lot," Brown noted. "They passed a couple of measures they should take pride in this in the House of Representatives that they were able to do that including with some Republican support. But they need to keep it front and center because it's front and center in the minds of most Americans and we deserve that."

Harris' proposals include an assault weapons ban, universal background checks and a ban on high capacity magazines. She says she would take executive action if Congress fails to act to within the first 90 days of her presidency.

Booker wants similar measures put in place but goes even further by requiring gun purchasers to obtain a federal gun license, federal regulation of the gun industry, and limiting gun buyers to one purchase per month.

Giffords recently announced plans to host a presidential candidate forum with March For Our Lives dedicated to the issue of gun reform. During the second night of the July debates, the issue of gun safety was not widely discussed which prompted criticism from gun control advocates.

"We know that the issue of gun violence has become a kitchen table issue across the country for American voters," said Robin Llloyd, managing director of Giffords. "[Of] course everything that happened this weekend has really amplified how important it is that we have a president with a plan to take action to address gun violence in this country and the candidate forum that we announced is an opportunity for Democrats to showcase what they're going to do to address gun violence."

Both groups are also continuing to push Congress to act before the next presidential election. The House previously passed bills to require to require background check and a 10-day waiting period for gun purchasers but the Republican controlled Senate has not considered the legislation.