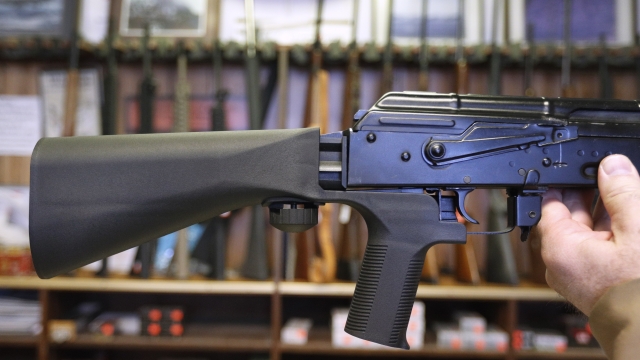 Bump stocks are officially banned in the United States after the Trump administration implemented a rule to outlaw the devices. But at least some groups say they will fight to protect the gun accessory that came under scrutiny after the largest mass shooting in US history.

"The reason that we're defending these things is it's not because you need an accessory to a firearm that allows you to bump fire, you can bump fire without a bump stock," said Aidan Johnston, a legislative assistant for Gun Owners of America. "The reason we're fighting this is because the legal implications of allowing a bump stock, an accessory, to be defined as a machine gun is dangerous to the second amendment and allows for the confiscation, in the future, of semi-automatic firearms."

Gun Owners of America say they plan to challenge the ban in the courts and hope to get an appeal.

Johnston says the ban could lead to further restrictions on firearms in the future.

The gun accessories are used to speed up the firing pace of a semi-automatic weapon when placed on a gun. They were made infamous after a gunman used the device in a shooting that killed nearly 60 people in Las Vegas in October of 2017.  After the shooting Republicans and Democrats called for the outlawing of bump stocks. The Trump administration announced a  ban on the devices last year and officially implemented the rule on March 26.

The ATF has put out guidelines of how to destroy the bump stocks and states like Washington implemented a buyback program leading up to the start of the ban. There could be over half a million bump stocks in the U.S. and most don't have serial numbers, making them hard to trace.  Possession of the device is a now considered a felony.

One group noticeably absent from the fight is the National Rifle Association. The powerful gun-rights group has previously said some regulation of bump stocks should be put in place, but Executive Director Chris Cox later clarified by saying quote “We don’t believe that bans have ever worked on anything.”

A federal district judge in Michigan ruled in favor of the administration's ban but an appeal for a second case is pending at the U.S. Court of Appeals in Washington, DC after the Supreme Court decided not to place a temporary hold on the ban.