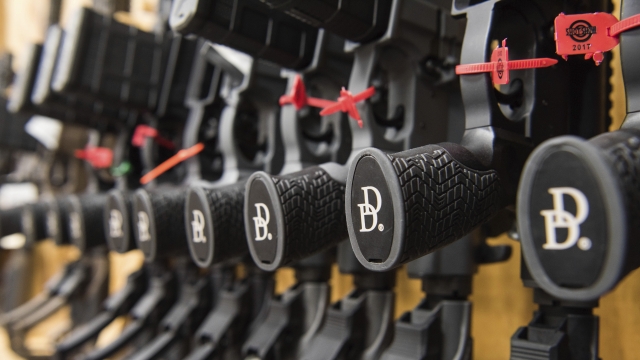 SMS
Gun Manufacturer Under Scrutiny After Texas School Shooting
By Maura Sirianni
By Maura Sirianni
June 11, 2022
A now removed image was tweeted by the company, days before the school shooting, showing a toddler handling one of its' AR-15 style rifles.

Following the mass shooting in Uvalde, Texas, a staff member at Robb Elementary school petitioned a Texas judge to force gunmakers to sit for a deposition, and to produce materials related to marketing, sales and profits of AR-15-style rifles.

Georgia-based Daniel Defense made the AR-15-style rifle a gunman purchased legally and used to kill 21 people in Uvalde, Texas. The manufacturer is now under fire for the way they allegedly market firearms to teens and youth with images of pop-culture icons and video games.

A now removed image was tweeted by the company days before the shooting at Robb Elementary School, showing a toddler handling one of its' AR-15 style rifles.

Sugarmann says the gun industry needs to be held accountable for the way it markets guns, especially military grade weapons.

"It can range from child-sized rifles, creating rifles in specific colors to appeal to children. And the fact is that the industry thinks this is cute—they think it's a marketing tool," said Sugarmann.

In 2014, the National Football League refused a Daniel Defense ad for the Super Bowl because it promoted guns.

Following the shooting in Uvalde, the gunmaker's website says, (in part):

"We are deeply saddened by the tragic events. We will cooperate with all federal, state, and local law enforcement authorities in their investigations."

A pledge that may soon be tested. Congress is asking Daniel Defense's CEO, Marty Daniel, for details about how he operates, noting "aggressive marketing of assault weapons to the public." However, the gunmaker maintains that its products are marketed toward self-defense, shooting sports and freedom.

"They're the only industry in this country that has that kind of immunity," said President Joe Biden.

In the days following the Uvalde attack, President Biden claimed the gun industry is the only industry immune to lawsuits, which critics argue is false.

In that case, the families settled with Remington for $73 million.

Now, Connecticut lawmakers, who successfully sued Remington, just filed a letter seeking documents and records from Daniel Defense. This petition was filed on behalf of Alfred Garza, the father of 10-year-old  Amerie Jo Garza who was killed in the Uvalde school shooting. Garza says is now his life's mission, and his purpose, to honor his daughter's memory by making sure something like this never happens.