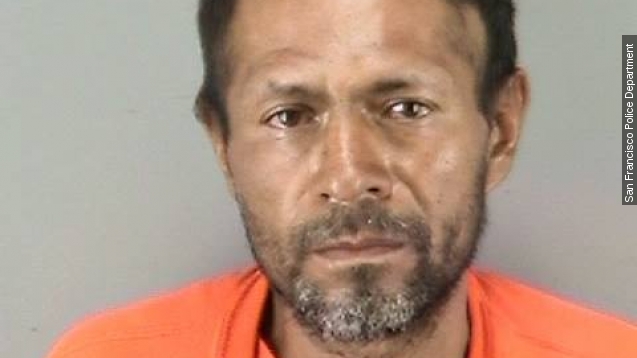 SMS
Gun In July 1 Shooting Reportedly Belonged To Federal Agent
By Evan Thomas
By Evan Thomas
July 8, 2015
Anonymous sources say the gun used in a July 1 shooting of a woman in San Francisco had been stolen earlier from a federal agent’s car.
SHOW TRANSCRIPT

A judge has set $5 million bail for the suspect in the fatal July 1 shooting of a woman along the San Francisco waterfront.

Multiple sources report the gun used in the shooting was stolen from the vehicle of a federal agent, with the Bureau of Land Management.

“The official, who was not authorized to speak publicly about the case, and spoke on condition of anonymity, said a police check of the weapon’s serial number shows it belonged to a federal agent.” (Video via USA Today)

In an extensive interview with KGO-TV, shooting suspect Juan Francisco Lopez-Sanchez says he found the gun wrapped in a shirt on a bench at the waterfront, and it discharged when he picked it up.

“Lopez-Sanchez told several reporters he accidentally fired the weapon, which we are now being told was stolen from a federal agent’s car,” said KNTV’s Cheryl Hurd.

The case has drawn national attention, as state and federal officials point to lapses in communication on immigration enforcement policy.

Federal authorities say they wanted to keep closer tabs on Lopez-Sanchez before the July 1 shooting, who has been deported several times since 1991.

But San Francisco’s status as a refuge city prohibits local law enforcement from cooperating with federal immigration officials unless they have a warrant.

This video includes images from the San Francisco Police Department and Getty Images.