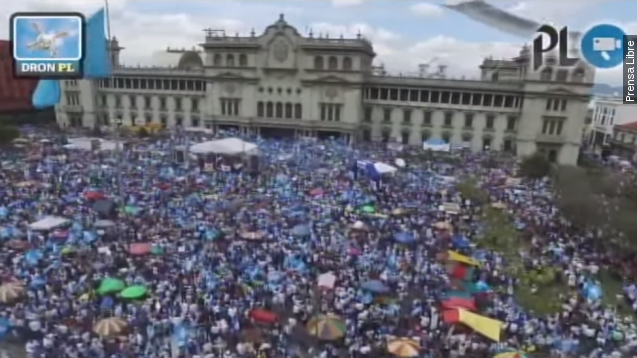 Thousands of protesters continue to march through the streets of Guatemala City demanding the resignation of President Otto Pérez Molina, who they accuse of corruption. (Video via Prensa Libre)

The scandal broke in April after The International Commission Against Impunity in Guatemala launched an investigation into Guatemala’s government. The probe found evidence of bribes paid to government officials by importers in exchange for lower tariff rates. The ring of corruption is being called “La Linea.”

The allegations have led to a series of arrests and resignations from high-profile officials of Pérez Molina’s cabinet, including the arrest of former Vice President Roxana Baldetti for allegedly accepting $3.7 million in bribes from import businesses. (Video via Publinews)

And recently, the country's Attorney General's office determined from evidence, including written correspondence and wiretapping, that President Pérez Molina was Baldetti’s co-conspirator. (Video via Ministerio Público)

And since then, the country’s entire political system has been crumbling.

“The government here in Guatemala is a bit paralyzed. Because right now the president is more worried about staying in power,” said Phillip Chicola, a Guatemalan Political Analyst to CNN.

“It’s a moment where the entire system of Guatemala is shaking,” activist and journalist Allan Nairn told Democracy Now!

Earlier this week, Guatemala’s Supreme Court approved the request by the Attorney General's office to lift the President's immunity from prosecution.

And Thursday, Guatemala’s Congress randomly assigned a commission of five legislators to consider the President's impeachment.

President Pérez Molina has adamantly denied the allegations against him and refuses to step down — much to the dismay of the country. (Video via Univision)

As the commission of five legislators convene to decide whether to cut President Pérez Molina’s term by a few months, the country of Guatemala prepares for general elections to be held on Sept. 6th.