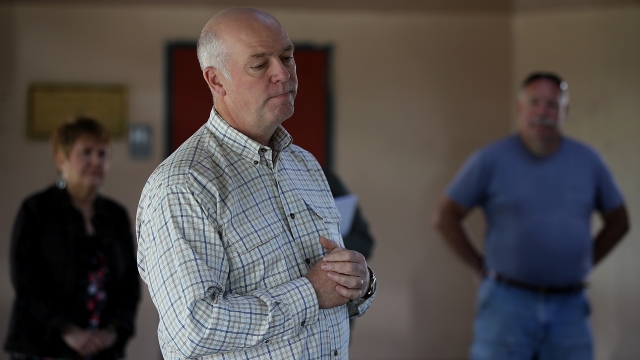 A reporter for The Guardian says he was "body slammed" by Montana congressional candidate Greg Gianforte.

A GOP congressional candidate is facing a misdemeanor assault charge after he allegedly body slammed a reporter the night before a special election.

A recording posted by The Guardian includes sounds of a scuffle, after which someone the paper claims is Gianforte shouts: "I am sick and tired of you guys! The last guy that came in here did the same thing. Get the hell out of here! ... Are you with The Guardian?"

Jacobs responds, "Yes, and you just broke my glasses."

The Guardian says Jacobs attempted to ask Gianforte a question while he was being interviewed by a local TV station.

Gianforte's campaign claims Jacobs aggressively pushed a recorder into Gianforte's face and the candidate tried to grab the device. The campaign says Jacobs then grabbed Gianforte's wrist and turned away, "pushing them both to the ground."

Some have called it "dead on arrival."

But other journalists who were at the scene are backing up Jacobs' assault claim. One reporter for Fox News says she saw Gianforte grab Jacobs by the neck, throw him down and then punch him.

Three local newspapers pulled their endorsements of Gianforte soon after news of the alleged incident broke.

Correction: A previous version of this story misstated a statement by Gianforte's campaign. The campaign claims Jacobs grabbed Gianforte's wrist, not that Gianforte grabbed Jacobs.

Some people close to the hip-hop scene say this move will help decriminalize artistic expression and hopefully deemphasize lyrics about crime.

Women in film are still struggling to find jobs in the film industry, specifically in animation.

Journalists in Mexico are now fleeing after threats of being killed by the cartel and a lack of protection by the police.