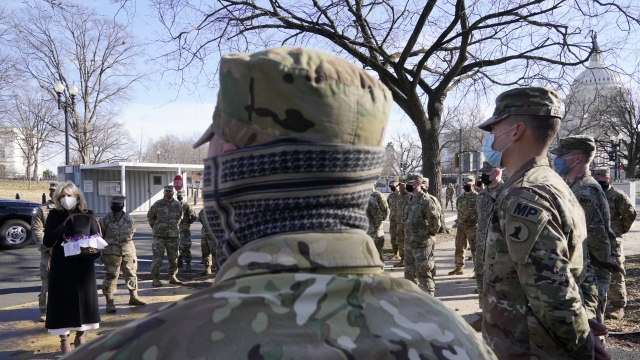 National Guard members say they'd been ordered to leave the capitol building when they were on breaks from their shifts.

New overnight — National Guard members were allowed back into the Capitol complex after lawmakers learned they'd been resting in parking garages according to reports.

You may have seen these pictures of the guard members resting in those parking garages. Members say they'd been ordered to leave the capitol building when they were on breaks from their shifts.

When lawmakers found out, several took action to make sure they could return indoors.

25-thousand guard members were brought into Washington ahead of the inauguration to provide extra security. Many of them have already left.

Those guard members were deployed following the January 6th attack on the capitol.

And we're continuing to learn more about who was a part of the violent mob that stormed into the building that day.

Here's an interesting stat: An NPR analysis discovered almost one in five people who have been charged for their involvement in the attack appear to have a military history. The analysis found that of more than 140 people facing charges so far, at least 27 have served or are serving in the military.