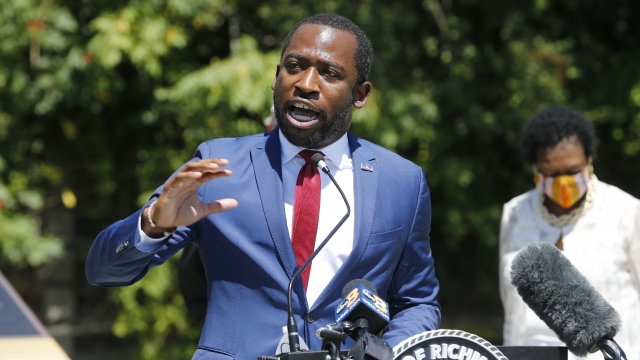 Peggy Morris spends her mornings here at Woodville Elementary School where she wears two hats: One as a crossing guard and one as a tutor for at-risk students.

Every day she greets her students with a smile and a hug. Despite having her hands full at work,  her salary doesn't always pay her bills at the end of the month.

"You have a job, you go there every day; You're just not making enough money," she said. "The $500 is helping people like me feel better, live, breathe easier."

For the past year, Morris has been receiving $500 from the city on top of her teacher salary to help make ends meet.

"It's been a godsend," she said. "Before the program, I was struggling with my bills. Some things were delinquent, fell behind; I couldn't pay certain things."

With the extra monthly boost, Peggy has been able to get on top of her finances, for the first time ever.

"My money is freed up to pay off other things so that the car will not be a problem anymore and I can focus my attention on something else. I want to get my student loan taken care of," she said. "When your money is funny, you can't buy groceries that you want, healthy food that you want to buy. You tend to buy fast food because it's cheaper. So now that I have this extra money, I'm able to buy healthier foods and make healthier choices and cook more at home than going out for fast food."

Morris is just one of the 18 Richmond residents receiving monthly checks for two years. You may be wondering who's paying for this. The funds are coming from The Cares Act, which is a federal COVID-19 relief bill, and two private foundation partnerships.

Newsy went with Morris to a panel celebrating the one year anniversary of the Richmond Resilience Initiative.

For Richmond Mayor Levar Stoney, the program is personal.

"My mother was 16. My father was 18 when I was born. I had the great fortune of being raised by my grandmother on her, you know, monthly social security check," he said. "I remember the stress on my grandmother's face when I would have to make that call to the bank and hear the automated message that said that we had $25 left the bank for the final week to feed two kids and feed herself."

Growing up, Stoney often heard the phrase "pull yourself up by your own boot straps."

NEWSY'S STEPHEN GRADDICK: So let me get this right — you have been giving away $500 dollars a month to 18 families with no strings attached?

MAYOR STONEY: No strings attached. And I know some people will say, 'Oh my gosh, are you disincentivizing people to work?' No. These are people who are working. They don't qualify, though, for any sort of federal assistance.

But some economist foresee a much bigger problem on the horizon.

Dr. Peter Morici is an economics professor at the University of Maryland, and for him, a guaranteed income is far from the magic bullet.

"If you provide people with a temporary benefit, they tend to use it to simplify their lives, get the utility bills out of the way and then focus on what they're going to do when the benefit ends. There's not a particular problem with that. Where the problem emerges is where you provide people with a permanent benefit that provides enough of a benefit that it makes it difficult to justify working if you're attached to a spouse," he said. "And some people do seem to lack the kinds of organizational skills — what we call executive skills — to manage their lives effectively. And I don't think any kind of guaranteed income is going to help them pull themselves up by their bootstraps."

What makes Richmond's guaranteed income program unique is that it targets people who are working and making too much money to qualify for federal benefits like food stamps or medicaid but are still not making a living wage. This is known as the "cliff effect" — and all of the program recipients have fallen off the benefits cliff.

"If you have a job and you're not making any money, that's that's not your fault," Morris said.

"Not every person was born on third base," Stoney said. "We got some folks still stuck in the dugout. And so if we can bolster the local safety net ... That's when they get off first base to round those bases and be successful. Shouldn't we do that?"

The mayor hopes that this small test in Richmond will show that giving money to people in need can disrupt the cycle of poverty.